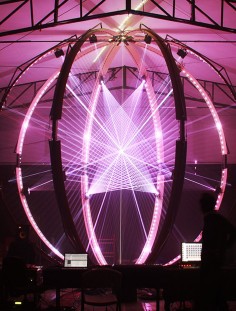 CoCoLab engages in the area of programming languages. We provide frameworks for the analysis and the transformation of programs. Our technology is based on know-how from compiler construction. The frameworks contain parsers and preprocessors which convert source code to abstract syntax trees and symbol tables. These data structures are the foundation of program analysis and program transformation.
.
.
.
.
.
.
.
source: creativeapplicationsnet
Created by COCOLAB from Mexico and commissioned by ARCA, Cycles is an audio visual installation comprised of a series of laser projectors to visualise short cycle audio compositions by a collection of A/V artists including Julian Placencia – Disco Ruido (MX), Shiro Schwarz (MX), Eduardo Jiménez (MX), Tijs Ham (NL) and Sebastian Frisch (DE).

The concept of the installation relies on the idea that our lives are ruled and defined by cycles. Cycles which at their core appear to be chaos, however at a distance they reveal to us the harmony and beauty of each repetition and their infinite possibilities. Our daily interaction with life’s cycles is an invitation to take the space and reflection time necessary to change our perspective.

The installation consists of 17 laser projectors including a circular custom-built sphere of 6.5 meters of diameter which orientates lasers towards it’s centre. “There were a lot of discoveries in this project” – Josué Ibáñez from COCOLAB tells us in the email exchange. This included learning how to manipulating light through lasers and the overall possibilities of expression in this new dimension. Whereas normally laser projects are used on flat surfaces, the surface here is the ephemeral centre of the sphere so the creation of crossed patterns from the beams of light that the structure was able to perform was quite a challenge.

The team started working on the project by using TouchDesigner to simulate the sphere in 3D before it was built. Later they used Max and Live to control and speak to the laser design program to trigger the extended library of experiments with lasers they were working on. However, none of this was making sense until the whole setup was up an running and they were able to see for the first time a self standing structure. Every track from the contributing artist brought certain uniqueness to the sphere and how the light performed.

For the future versions of Cycles, the team intends to perform and collaborate with more musicians in hope to extend both visual and spatial possibilities of the installation.