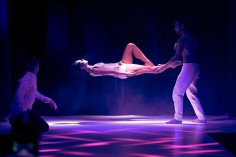 source: compagniehybride
Get inside our new conception, part of the Vivacy gala at the Pavillon Vendôme. The body, generator of emotion will take you through a full circle of feelings.

About: Dance artist, Lionel Hun is characterized by the diversity of his gestural. Boasting an unusual background, he offers a current and unique choreographic language. His work focuses on the notion of meeting, mixing genres and the non-indoctrination of the movement
He began his studies in dance at the age of five at the National Dance Conservatory in Avignon, training in ballet, contemporary and modern-jazz. In 1998, he fell in love with hip hop. This new passion led him into a process of blending his academic dance training with urban movement.

In 2002, Lionel Hun received his diploma in choreographic studies, a gold medal. At only nineteen years of age, he choreographed his first piece. A mixture of styles merging ballet, contemporary and hip hop dance for the Ballet de la Cité des Papes. He is credited as being the first to bring hip-hop to the conservatory.

He then went to Belgium, joining the Company Charleroi/Danses Plan K (Choreographic Center of the French Community, formally known as Royal Ballet of Wallonie), under the direction of Frédéric Flamand. He then dedicated himself into the exploration of contemporary dance in all its forms : Improvisation, experimental laboratories, contact dance, interdisciplinary research. In 2005, he was invited to join the National Ballet of Marseille in order to create, teach, and dance the contemporary repertoire.
After a worldwide tour, performing in some of the world most prestigious theaters, Lionel Hun joined the cast of Cirque du Soleil in 2007. He went through the creation of Zaia, Cirque’s first resident show in Asia, and performed it in Macau. Alongside his work with recognised companies, Lionel Hun has also made a name for himself as a free-lance artist. Working internationally with Franco Dragone and Giuliano Peparini, Rheda, Steps Ahead, Star Dancers Ballet…

In 2010, he graduated from the State Diploma of Dance Teacher. In a need to defend his artistic purpose and in order to give a real dimension to his artistic vision, Lionel Hun founded the Hybrid Creative Production. The company seeks to create new contexts of expressions around choreography creation and is dedicated to produce performing arts in all it’s forms. His approach to choreography particularly focuses on mixing genres and sharing a unique fusion of aesthetics.

Today, Lionel Hun pursue his career as a Creative Director, Choreographer and Teacher all over the world. His aim is to promote his art and his expertise in the service of dance, culture, art and live performance.