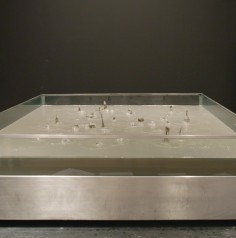 source: artsynet
The installation of the Museum of Modern Art’s Robert Rauschenberg retrospective got pretty messy this week. Ahead of the show’s opening on May 21, curators were tasked with mixing 8,000 pounds of mud inside a gallery on the museum’s fourth floor. The result: Mud Muse (1968–71), one of the most ambitious and technologically complex works the artist ever created. The installation—a vat the size of a swimming pool filled with gurgling, pungent mud—will be exhibited in the US for the first time in almost 20 years.

MoMA chronicled the zany installation process in a three-part video series. (You can view the first video, released today, at the end of this article.) It’s clear Mud Muse is not your standard pile of mud. The bottom of the vat contains a complex network of air pumps equipped with sound sensors. Based on the frequency of whatever music is playing, the pumps release varying amounts of compressed air, which in turn causes the mud to bubble up. Before long, the bubbles are gurgling in time to the music.

“This was cutting-edge technology at the time,” says Leah Dickerman, the painting and sculpture curator at MoMA who co-organized the show. The notion that sound could control motion “was an emerging sign of our own digital age.”

Rauschenberg created the work in collaboration with engineers from the aerospace and manufacturing corporation Teledyne as part of the Los Angeles County Museum of Art’s Art and Technology Program, which invited artists and scientists to work together to realize unconventional projects. It took him, and a team of five engineers, three years of trial and error to get Mud Muse right.
Some additional assembly was required when the work arrived at MoMA following its debut at Tate Modern in London, where the Rauschenberg retrospective closed last month. “When you receive it, you don’t have the clay—you just get the vat and the sound system,” Dickerman says.

To complete the work, a group of around five art handlers zipped themselves into Tyvek suits, grabbed industrial-size immersion blenders, and began combining bentonite—an absorbent, powered clay commonly used in the drilling of oil wells—with water to create the mud. (Rauschenberg may have been familiar with this process from his childhood spent around oil drilling in Texas.) “It looked like they were brewing some massive stew,” Dickerman says. “I thought they looked like oompa loompas.”

Luckily, Mud Muse also comes with its own personal caretaker, Gunnar Marklund, who oversaw the proceedings. The kindly Swedish exhibition technician and electrician for the Moderna Museet has been in charge of Mud Muse since 2004. (The work has been in the collection of the Stockholm museum since 1973.)

Marklund “has a sense of when the mud has achieved the right sense of liquidity—it’s a little more like slime than you might think,” Dickerman says. For his part, Marklund sees his custodianship of Mud Muse as a kind of sacred duty; he was tapped for the job after the previous caretaker suddenly died. (“They said, ‘Gunnar, you have to take care of the Mud Muse,’” he recalls.)

When it is on view, Mud Muse bubbles to the tune of a recording Rauschenberg made of the work itself bubbling to music played by his friends. But Marklund has a habit of testing the work to the more upbeat sounds of ABBA.

A feat of collaboration

Mud Muse is just one of the 250 works in MoMA’s retrospective, but it embodies many of the characteristics that defined Rauschenberg as an artist: relentless experimentation, an openness to unorthodox materials, a commitment to collaboration, and a passion for technological innovation.

“Many artists have antipathy for technology; you’re seeing it replace human subjectivity, the mark of the artist’s hand,” Dickerman notes. “But Rauschenberg embraced technology fully as a part of contemporary life, and you see that in his work. You realize how radical an act that was then: Not only is art strokes of paint on canvas, but it could be a technological construction as well.”
.
.
.
.
.
.
.
source: theguardian
A primordial swamp with 1,000 gallons of bubbling, glooping, pungent mud has been installed at Tate Modern as part of a show celebrating one of the 20th century’s artistic trailblazers.

The gallery will open its Robert Rauschenberg retrospective to the public on Thursday, a winter blockbuster and the most comprehensive survey of the artist’s work for 20 years.

Rauschenberg, who died in 2008, was one of the titans of 20th-century American art, best known to some for his combines, which are painting-sculpture hybrids.

But he was interested in almost all art forms and techniques including painting, sculpture, photography, stage design, technology and performance.

‘Monogram’, Rauschenberg’s stuffed goat. Photograph: Sarah Lee for the Guardian
“He was driven by curiosity,” said Christopher Rauschenberg, the artist’s son. “It was always, ‘What would happen if I did this? If I did that?’ He had a very clear sense of, ‘By the time I know how to do something, it is time to do something else’. He was always trying to discover and explore.”

One of the show’s highlights is Mud Muse (1968-71), which is 1,000 gallons of bubbling Bentonite clay in a 12ft by 9ft (365cm x 274cm) tank. It is from a time when everyone was fascinated by the moon, after the Apollo landings, and the work could be a recreation of the surface.

The work is also something of a technical feat in that it is listening to itself. The mud’s bubbles and spurts are measured by microphones, which in turn trigger a complex series of pumps to release more air and create more bubbling.
.
.
.
.
.
.
.
source: afasiaarchzine
The early 1950s, when Rauschenberg (1925–2008) launched his career, was the heyday of the heroic gestural painting of Abstract Expressionism. Rauschenberg challenged this tradition with an egalitarian approach to materials, bringing the stuff of the everyday world into his art.Working alone and in collaboration with artists, dancers, musicians, and writers, he invented new, interdisciplinary modes of artistic practice that helped set the course for art of the present day. The ethos that permeates Rauschenberg’s work—openness, commitment to dialogue and collaboration, and global curiosity—makes him, now more than ever, a touchstone for our troubled times.