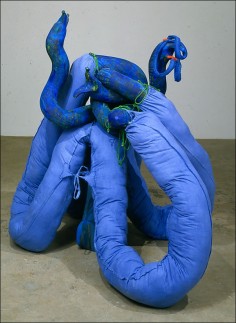 I have a unique capacity for daydreaming. This is another way of saying that I like to lay down and drift off into another world. Another way of saying that I am good at doing nothing. I would like it if this drifting quality were present in the work. Many of my recent pieces are quite small and hang from the ceiling from filament, giving the feeling they are floating, perhaps like islands floating in the air. There is something very unexpected about this, but it also feels familiar because it partakes of the spirit of a child’s fairy tale –things coming out of nowhere, taking an imaginative leap. This to me has the logic of daydreams, a logic that children are much closer to than we are. This is not to whitewash the daydream; it also has a very dark side, and there is always something unsatisfying and disappointing about a daydream because it contains an unfulfilled wish, or something that is not there. I am interested in this absence, or sense of loss, that is at the heart of the imagination, of daydreaming. Winnicott once said that thumb-sucking is the first act of the imagination, which not only suggests the primacy of the imagination in human development but also its origination in loss. I think this gets at the energy of my work, the constant need I have (that we all have) to make things up. The endlessness of the imagination, I think, is reflected in the endlessness of my sequences.

I want a lexicon of transformations. Or self-transformations. It often looks as though the sculptures are transforming themselves: the little ending or strange addition is a consequence of, or intrinsic to, the shape it is connected to. And I think it’s impossible to think about transformations without expectations. I like to fool around with expectations without seeming to: something grows, something turns from one thing to another thing, though of course it’s the same thing, since there’s always a thread. But the ends of things are more sensitive, I think. The tip of the penis. The feet, the nose, the hands. And what if, like clown’s feet, they are unusually large? A transformation taken too far is a mistake–like aiming for Kansas and ending up in Tennessee.

In some of my ladder pieces there is this sense of being transported. The ladder gets so small and eerily fragile, as though an attempt has been made to construct an escape, but the result is not even worth it (you’d have to be an ant to be transported by it). In any case, where the ladders lead is of no consequence, or at least it’s up in the air. That they lead away from something matters more. These are failed ladders, makeshift ladders, pieced together, sometimes broken. Yet there is a movement through space that is physical, but it is also like a mind trying to do something, trying to get itself untangled, trying to make progress. A sad, pathetic, provisional sort of progress.

What I find I cannot talk about, and what is frequently left out when artists talk about making art, is the need to make it. Let me paraphrase something from Nietzsche that has stayed with me: someone with a labyrinthine mind does not seek the truth, he only seeks his Ariadne. While the truth seeker is looking for an answer, I’m looking for an exit, an escape hatch. Sculpture, to some degree, is that escape hatch. Escape from what? Guilt, worry, anxiety, shame, self-hatred, an inability to communicate, boredom, fear–you name it. Yet it is also these emotions, hidden beneath its “whimsical” exterior, that drive my work.
.
.
.
.
.
.
.
source: artspace