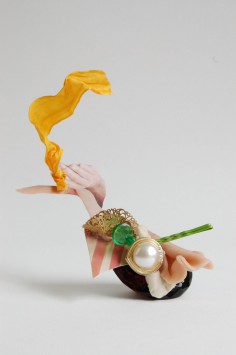 Samantha Donnelly’s practice is primarily sculptural. She has a materials-led approach to making, underpinned by references to art history and popular culture – specifically photography, TV, film and advertisements. Her work is made through questioning, rephrasing and reworking a range of sculptural matter, mass-produced household wares, imported fashion bargains and second-hand finds in the studio over a period of time. Her way of making gives the work a strong sense of time which mirrors conventions found in the media (editing, cropping, elimination, montage, narration). This results in a fragmented / abstract / partial quality to finished work; some appearing relic-like and precious, whereas others are seemingly transient and momentary, on the edge of dissolve.

Samantha Donnelly’s practice is concerned with breaking down subjects and reconfiguring them in new constellations. Bringing together appropriated ephemera and quotidian materials such as magazines or cut-out photographs to produce assemblages, Donnelly reworks material remnants from various areas of contemporary culture, allowing them to dialogue and resonate within the same piece. By drawing our attention to surface and formal elements such as composition and colour, Donnelly’s work often references art history, particularly Modernism and the Baroque. She amalgamates objects and images from diverse sources with humour to create configurations that are playful and quite often fragile or absurd.