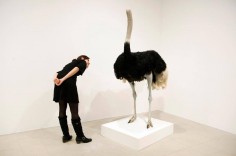 Some people think David Shrigley’s artwork isn’t serious enough to be, well, taken seriously. Yet the artist, noted for the humour that runs through his comical line drawings, may have the last laugh after being nominated for the Turner Prize.

The 44-year-old was named on the shortlist for the UK’s most prestigious contemporary art award, and its £25,000 bounty, alongside film and installation artist Laure Prouvost, painter Lynette Yiadom-Boakye and Tino Sehgal, whose “live encounters” have been performed in sites including Tate Modern. Shrigley, who was born in Macclesfield and has been based in Glasgow since studying at the Glasgow School of Art, was nominated for the retrospective of his work at the Hayward Gallery in London. His artwork has won legions of admirers including celebrated musicians and authors, and even inspired obsessive fans to tattoo his sketches on their bodies, yet has been ignored for serious acclaim from the art world.

“He had been wrongly overlooked for a long time because his work suggested itself as being just funny and therefore marginal,” said Penelope Curtis, director of Tate Britain and chair of the jury. “Just because it’s funny, doesn’t mean it’s not good.”

He had been seen as a “wild card,” Ms Curtis said, but his show at the Hayward had “quite considerable impact”. She added: “Really it was a new look at an artist who had been familiar for quite some time.” Shrigley’s exhibition included drawings, sculpture, photography and film. The jury said it revealed “his black humour, macabre intelligence and infinite jest”. Among the stand out works was a stuffed dog holding a sign reading “I’m dead”.

Cliff Lausan, curator of Shrigley’s show at the Hayward, said the nomination was “wonderful news. I’m really pleased for him”. ?He said: “What makes David’s work unique is he’s got one foot in the pop culture world, the way his drawings circulate, and the other in fine art…”

The work has brought him fans including author Dave Eggers, and musicians with whom he has collaborated including Blur and Franz Ferdinand.

Mr Lausan said Shrigley’s appeal stems from his sense of humour. “Every piece of work he does, the drawings, sculptures and collaborations with other artists. His sense of humour cuts right through.”

The 29th Turner Prize will be the first one to be awarded outside of England. The winner will be announced in the converted military barracks in Derry as part of the city’s year-long reign as UK City of Culture.
.
.
.
.
.
.
.
source: premierartscene

British artist David Shrigley is for the first time in a major retrospective exhibition in the UK to be seen at Hayward Gallery. ‘Brain Activity’ covers works from the mid-1990s to the present day and shows what Shrigley is all about: he likes to play—with our ideas, associations, and reactions.

Shrigley’s distinctive mark is his handwriting—all capitals—in black ink on whatever medium he is working with. Most well-known are his quirky drawings of which the show features 117 new works done in 2012. Each one creates a tragicomic narrative, shows a misfortunate situation of everyday life in its blank and intimate humanness, or just puzzles.

Another drawing depicts Magritte’s pipe and the caption ‘THIS IS NOTHING’. Nice pun, Shrigley. The questioning of representation is a recurrent thread in his work. As is the uncanniness in the encounter with seemingly familiar objects and the sudden feeling that something is wrong here.
.
.
.
.
.
.
.
source: creativaclub