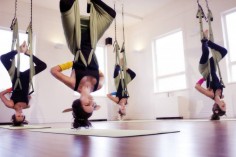 Work: Sheep Nation Sheep Nation a series of photographic works by New York-based contemporary artist Davide Luciano, whom explores this fertile ground through a characteristically satirical yet compassionate lens.This large-scale photographic series includes twenty-three intimate and introspective portraits of sheeple and six scenes. The sheeple were created with prosthetic masks molded on Davide’s face and then sculpted by a special effects make-up artist. It was a 3 hour transformation for the models who then stayed in sheep character all day to get the various shots. The entire series took eight months to produce and three days to shoot with a crew of 15 people. Davide’s background in film influences the shot as well as the production, he decided to use continuous lighting for the portraits and was extremely meticulous with every detail in each scene. The editing and printing process was also very involving for the artist who wanted the portraits to have an vintage film feel, he contrast the old and new by printing on high gloss face-mount acrylic.The portraits convey the feeling that behind every mask lies a personal truth, an innocence, a sense of individualism, a longing to be seen and heard.The 6 mises en scène depict people unable to think for themselves. Allowing the influences of different forms of media to undermine their own identity and wander mindlessly in herds, like sheep.
Photographer: Davide Luciano
.
.
.
.
.
.
.
source: designboom

‘sheep nation’ is a series of photographic works by montreal-based contemporary artist davide luciano who explores this narrative through a characteristically satirical yet compassionate lens. the large-scale cinematic images include twenty-three intimate and introspective portraits of sheeple and six scenes of them performing everyday activities. the features were created using prosthetic masks moulded using luciano’s face by a special effects make-up artist which there then added to the actors. the entire series took eight months to produce, and consisted of a three day shoot with a crew of 15 people. on set, it took the models three hours to transform into their sheeple characters, which they kept active all day to throughout the various locations. the continuous lighting for the portraits was staged meticulously, adding to the narrative and scene of satire that surrounds the photographs. the surrealist qualities are accomplished through the editing and printing process, without the aid of photoshop. the old and new traits are contrasted by printing on high gloss face-mount acrylic to capture the vintage film feel.
.
.
.
.
.
.
.
.
source: emptykingdom

‘Sheep Nation’ is a photography series by Montreal based artist Davide Luciano who explores a satirical society. The series is presented in a journalistic/portraiture style with some special effects and prosthetic molds used on Luciano’s actors. ‘Sheep Nation’ took approximately 8 months to produce, and 3 days to shoot with a 15 man crew.