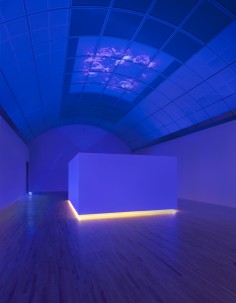 Entering this spectacular exhibition by the West Coast video artist Diana Thater, you might think you’ve walked onto the set of a Stanley Kubrick sci-fi movie. The whole show is flooded by an intense blue glow cast by lights beaming from the floor in all corners. In the center of the gallery is a mysterious, room-size box, which appears to hover a few inches off the floor over a band of bright yellow light. A grainy video is projected on the ceiling directly above the box. It shows large beetles — dung beetles — slowly burrowing into the earth and moving about in thicket of brown grass.

In the smaller, oblong gallery, also bathed in blue light, are two video works, each consisting of nine rectangular panels. Both show what seems to be some sort of roughly spherical space vehicle against a background of countless slowly moving stars. In fact, the object is a Zeiss star projector in the planetarium of the Griffith Observatory in Los Angeles.

A gallery news release explains that scientists have learned that dung beetles navigate at night by the stars of the Milky Way. If the sky is blocked, they wander aimlessly. Ms. Thater is obliquely addressing a global ecological problem: In urban areas where electric lights are always on, the stars are harder to see. Perhaps that affects life on Earth in ways no one has yet imagined. Maybe astrologists have been on the right track all along.
.
.
.
.
.
.
.
source: inhalemag

Thater is one of the most important video artists working today. Since the early 1990s, she has created a wide range of film, video, and installation-based works whose sculptural forms engage spatial perception in physical, as well as conceptual, terms. Her pioneering oeuvre was among the first to push the boundaries of how new media art is displayed, helping to cement its position in the art world.

Through a combination of the temporal qualities of video and the architectural dimension of its physical installation, Thater’s work explores the artifice of its own production and its capacity to construct perception and shape the way we think about the world through its image. Natural diversity, wildlife, and conservation have been persistent themes in the artist’s work, and she has dedicated herself to an examination of the varied kinds of relationships humans have constructed with animals. While her in-depth studies of ecosystems and animal behavior propose observation as a kind of understanding in itself, her ethical position is implicit in the work, which, while subtly political, provides views of the sublime in all its incarnations—stunning, beautiful, and simultaneously terrifying.

In her new installation, which like the exhibition is titled Science, Fiction, Thater focuses on the dung beetle and the intricate navigation system it deploys in disposing balls of animal excrement, its main source of nutrition. Recent studies have revealed that the species uses the Milky Way to orientate itself at night, currently the only insect known to do so. In an experiment in which the beetles were placed on an outdoor table, they were only able to navigate in their usual straight line with an open view of the nocturnal sky—when their overhead vision was blocked, their movements became erratic and slowed drastically. The same experiment was repeated inside a planetarium, alternately turning the Milky Way on and off, and the animals’ path was demonstratively straighter and faster in light of the galaxy.