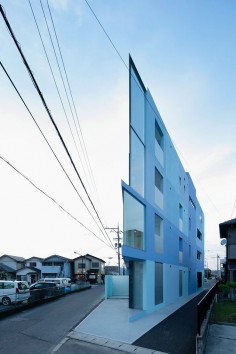 source:contemporistcom
The site is a manufacturing area in Youkaichi City in Shiga Prefecture. There are many big factories in this town. A lot of immigrants from South America live here among the local people.

This is a residential area as well an industrial area. It is also a popular drinking area where many bars and restaurants for such common people are scattered. There is a highway interchange nearby the town. The shape of the lot is a sharp triangle which is unusual for building a house.

The site is a wedge-shaped flatiron lot which remained at a corner where two streets meet at an acute angel. It was left behind neither residential nor for industrial development. No one wanted to buy it, and the public sector would not invest to change it into a park: a lot remained bereft of life for a long time.

The elevation of this building takes the shape of the triangle plot. It is a triangular residential complex of 13 meters height with the base line 23m x height 12m x oblique line 26m. It is a typical tenanted apartment house with seven rooms, 1-3rd two units on each floor and one on the 4th floor.

Each room is composed of a living room of 13 m2, two bed rooms with 13 m2 and 9m2, a prefabricated bathroom, a kitchen system and a toilet. They are planned to be easy to rent for town people.

The concrete which serves as a structure is designed carefully. Other than that specific materials are not used here. The exterior wall is made out of square cut stone, concrete and glass formed like scattered cards on it. They are bound by a “cross” so that the spread out material would not disjoin.

It looks like a present, a toy box or a castle where the boys and girls of the story of Michael Ende could be entering. It is a triangular building configured by the square elements. The cross confines the power of the mixed materials into one.

A shuffle of stones, concretes, and glass. Keen edge of each material is too sharp. A shuffle of mass and void. The design “on the corner” consists of blue and the cross. A composition of line and plane surface is created by the clearly distinguished edges of the material.

The confusing imagination is created to make the so far disregarded place interesting, which lies at the corner of messy scenery in an inner city

The edge of the triangular pyramid is like a wrecked boat, a fictional tip of a boat as if it were escaping from town. Where on earth is here?

A corner that makes you feel you are nowhere at the end of the world, where no one can go further anymore. It is far from the center of town, a place which makes you wonder where you are. It is a place to make the town to be nowhere but only here, and it makes you feel like a distinguished person.

We want to highlight the discarded lot from the urban framework by emphasizing its shape, building architecture similar to illusion. An illusion required by the town people. Reality that is similar to an illusion that one town has something to do with someone.

It seems as if this illusion deceives people to obscure their eyesight and feel invited to another world. It is pretentious, yet it is surrealistic too.