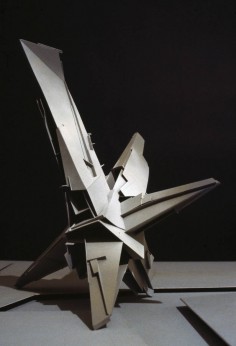 source:bldgblogcom
After posting a project by Jimenez Lai back in January, Lebbeus Woods got in touch with an earlier project of his own, called Horizon Houses (2000).
In his own words, the Horizon Houses are “are spatial structures that turn, or are turned, either continuously (the Wheel House) or from/to fixed positions (the Star and Block Houses).

“They are structures experimenting with our perception of spatial transformations, accomplished without any material changes to the structures themselves. In these projects, my concern was the question of space. The engineering questions of how to turn the houses could be answered by conventional mechanical means—cranes and the like—but these seem clumsy and inelegant. The mechanical solution may lie in the idea of self-propelling structures, using hydraulics. But of more immediate concern: how would the changing spaces impact the ways we might inhabit them?”

These self-transforming, perpetually off-kilter structures would, in a sense, contain their future horizon lines within them, as they rotate through various, competing orientations, both always and never completely grounded.
Each house in the series thus simultaneously explores the visual nature—and spatial effect—of the horizon line and the vertical force of gravity that makes that horizon possible.

As Woods phrases it, “Gravity is constantly at work on the materials of architecture, trying to pull them to the earth’s center of gravity. An important consequence is that this action establishes the horizon.” However, he adds, “in the absence of gravity there is no horizon, for example, for astronauts in space. It is from this understanding that Ernst Mach developed his theory of inertia frames, which influenced Albert Einstein’s relativistic theory of gravity”—but, that, Woods says, “is another story.”

The Star House, seen immediately above and below, was what brought Woods to comment on the earlier post about Jimenez Lai; but the other “ensemble variations,” as Woods describe them, while departing formally from the initial comparison with Lai’s own project, deserve equal attention here.
.
.
.
.
.
.
.
source: nicksocrates

Yeah, yeah, Lebbeus Woods: conceptual architecture … ” said a friend and recent architecture school grad just before I dodged beach traffic and made my way downtown for a new exhibit at The Southern California Institute of Architecture “ … never built anything.”

Although “The Light Pavilion“ — of his design — stands prominently in Chengdu, China, the late Woods would have taken the jab with a grin. A non-architect’s architect (never degreed nor licensed), his experimental designs are meant to explore the very definition of “unbuilt.” So when the exhibition team at the Southern California Institute of Architecture (SCI-Arc) rolled out one of Woods’s plans over a queer triangular island of concrete in the heart of Los Angeles’ Arts District, they may or may not have been surprised to watch a steel vector field clamor out onto the pavement.

“Earthwave” was initially designed by Lebbeus Woods and Christoph a. Kumpusch in collaboration with Adam Orlinski, and is based on a Lebbeus Woods drawing from 1997. The 18’x18’, two-and-half-ton “inhabitable drawing” stands unguarded and is meant to be experienced like the jungle gym gone wrong it is. But, save for a skyward POV, the site forces the viewer to consider the piece against a backdrop of murals, eateries, artist lofts and distant skyscrapers.

“Architecture is war,” said Woods. War against the established, the approved, the built. Only in experimental beginnings do we find relief. And what does this mean for “Earthwave” now that it’s built? Woods went on: “I am an architect, a constructor of worlds, a sensualist who worships the flesh, the melody, a silhouette against the darkening sky. I cannot know your name. Nor you can know mine. Tomorrow, we begin together the construction of a city.”
.
.
.
.
.
.
.
source: arqbacana

Lebbeus Woods is an Archetype includes an exhibition in the SCI-Arc Gallery and a public art installation in the L.A. Arts District’s Bloom Square, both aiming to demonstrate the fearless nature with which the late visionary architect and draftsman created. It is assembled by an exhibition team including SCI-Arc graduate programs chair Hernan Diaz Alonso, Christoph A. Kumpusch, and design faculty Dwayne Oyler and Alexis Rochas.

Three blocks away from its campus in downtown Los Angeles, SCI-Arc completed Woods’s Earthwave, an “inhabitable drawing” originally designed, but never built, for the 2009 Biennale of Architecture and Art of the Mediterranean in Reggio Calabria (BaaM), Italy.

Earthwave was initially designed by Lebbeus Woods and Christoph a. Kumpusch in collaboration with Adam Orlinski, and is based on a Lebbeus Woods drawing from 1997. It is an installation that proves to a new generation that there is a fine line between “unbuilt” and “unbuildable.”

The temporary 18’x 18’, two-and-a-half-ton steel structure built by SCI-Arc is set to be unveiled on June 28. It includes four parallel steel frame “swarms,” each frame penetrated by a dense field of steel vectors, using the urban Arts District as a backdrop for Woods’s dystopian vision.

The public is invited to conceptually inhabit the sculpture in a 1:1 scale, giving the piece a new dimensionality and relating back to the 2-D and 3-D nature of the project.

The site of the project—a busy walkable intersection in downtown L.A.’s Arts Distric—will free it from being perceived as an object to be viewed from a distance and transform the structure into a metric of urbanity meant to be freely moved through.

The SCI-Arc Gallery component of Lebbeus Woods is an Archetype, opening October 11, will include several original, rarely seen Woods drawings from private collections, and most notably, recently uncovered video footage from a 1998 interview recorded in Vico Morcote, Switzerland, then part of a SCI-Arc European campus program. The video articulates Woods’s philosophy and the forces and influences which shaped his thinking, including the work of Heinz von Foerster and the systems-thinking theory of Cybernetics. A public symposium on opening night will feature a panel of young architects who will discuss Woods’s influence on their generation.
.
.
.
.
.
.
.
source: nytimes

Lebbeus Woods, an architect whose works were rarely built but who influenced colleagues and students with defiantly imaginative drawings and installations that questioned convention and commercialism, died on Tuesday in Manhattan. He was 72.

In an era when many architecture stars earned healthy commissions designing high-rise condominiums or corporate headquarters, Mr. Woods conceived of a radically different environment, one intended for a world in conflict.

He conceived a post-earthquake San Francisco that emphasized its seismic vulnerability. He flew to Sarajevo in the 1990s and proposed a postwar city in which destruction and resurgence coexisted. He imagined a future for Lower Manhattan in which dams would hold back the Hudson and East Rivers to create a vast gorge around the island, exposing its rock foundation.

“It’s about the relationship of the relatively small human scratchings on the surface of the earth compared to the earth itself,” Mr. Woods said of his Manhattan drawing in an interview several years ago with the architectural Web site Building Blog. “I think that comes across in the drawing. It’s not geologically correct, I’m sure, but the idea is there.”

Mr. Woods’s work was often described as fantasy and compared to science-fiction imagery. But he made clear that while he may not have expected his designs to be built, he wished they would be — and believed they could be.

“I’m not interested in living in a fantasy world,” Mr. Woods told The New York Times in 2008. “All my work is still meant to evoke real architectural spaces. But what interests me is what the world would be like if we were free of conventional limits. Maybe I can show what could happen if we lived by a different set of rules.”

He spread his message from many platforms. He was a professor at Cooper Union, spoke at symposiums around the world and built sprawling temporary installations in Austria, Italy, Southern California and elsewhere. He also wrote a well-read blog.

Earlier this year, in a post explaining why he chose to become an architect, he said winning commissions was not a major motivation.

“The arts have not been merely ornamental, but central to people’s struggle to ‘find themselves’ in a world without clarity, or certainty, or meaning,” he wrote.

Mr. Woods often criticized what he saw as a complacent and distracted status quo in his field. But his colleagues said his commitment to creating an alternative showed that he had hope.

“If he really felt as cynical and skeptical as he sometimes would say, then why the hell draw this stuff?” Eric Owen Moss, an architect and longtime friend, said in an interview on Wednesday. “There’s an incredible amount of power just in the draftsmanship. He’s like Durer — you know, woodcuts, 15th-century stuff. There’s content — intellectual content, social content, artistic content, political content — but the very act of making these sort of remarkable things and his drawing capacity made a kind of new language.”

Christoph A. Kumpusch, a longtime friend and colleague who, like Mr. Woods, taught at the Cooper Union in New York, said Mr. Woods “wanted life and architecture to be a challenge” and “always wanted us to feel a little uncomfortable in order to make things change.”

Mr. Kumpusch collaborated with Mr. Woods on the only permanent structure he built, a pavilion for a housing complex in Chengdu, China, designed by Mr. Holl. Called the Light Pavilion, and completed in October, the pavilion is reached by several glass and steel bridges and ramps.

Lebbeus Woods was born on May 31, 1940, in Lansing, Mich. His father, an engineer in the military, died when he was a teenager. His survivors include his wife, Aleksandra Wagner; their daughter, Victoria; and a son, Lebbeus, and daughter, Angela Bechtel Woods, both from a previous marriage, and seven grandchildren.

An exhibition of work by Mr. Woods will be on display at the San Francisco Museum of Modern Art beginning in February.

“Outside-the-box” thinking has become a cliché used in advertising, corporate strategy and politics, Mr. Moss said, but Mr. Woods took it to another level.