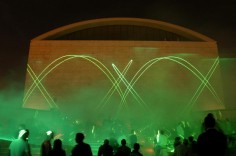 source: evdh
Edwin van der Heide is an artist and researcher in the field of sound, space and interaction. He extends the terms composition and musical language into spatial, interactive and interdisciplinary directions. His work comprises installations, performances and environments. The audience is placed in the middle of the work and challenged to actively explore, interact and relate themselves to the artwork.
He has presented his work at renown museums and festivals as SMAK – Ghent, Ars Electronica Festival – Linz, Stedelijk Museum – Amsterdam, V2_’s DEAF – Rotterdam, ICC – Tokyo, NAMOC – Beijing, Transmediale – Berlin, SONAR – Barcelona, Taipei Fine Arts Museum, SFMOMA, FILE – Brazil and SONAMBIENTE – Berlin.
Beside’s running his own studio he’s part-time assistant professor at Leiden University (LIACS / Media Technology MSc programme) and heading the Spatial Interaction Lab at the ArtScience Interfaculty of the Royal Conservatoire and Arts Academy in The Hague. He was Edgard Varèse guest professor at the Technische Universität Berlin (2009), won the Witteveen+Bos Art+Technology Award 2009 for his entire body of work. He was an invited artist and guest professor at Le Fresnoy, studio des arts contemporain in France for the year 2011-2012.
LSP is a research trajectory exploring the relationship between sound and three dimensional image by means of laser projection. In 1815 Nathaniel Bowditch described a way to produce visual patterns by using a sine wave for the horizontal movement of a point and another sine wave for the vertical movement of that point. The shape of the patterns depends on the frequency and phase relationship of the sine waves. The patterns are known as Lissajous figures, or Bowditch curves.
LSP interprets Bowditch’s work as a possible starting point to develop relationships between sound and image. Since sine waves can also be used to produce pure (audible) tones, it is possible to construct a direct relationship between sound and image. Frequency ratios in sound, de-tuning and phase shifts can have a direct visual counterpart.
Although theoretically all sounds can be seen as sums of multiple sine waves, music in general is often too complex to result in interesting visual patterns. The research of LSP focuses on the subject of composing signals that have both a structural musical quality and a time-based structural visual quality. Different relationships between sound and image are used throughout both the performance and the installation form.
By combining audio with visuals the spatial perception of sound is often being reduced because of the two-dimensional nature of the image versus the three-dimensional nature of sound. With laser(s), it is possible to create three-dimensional changing environments that surround the audience. Here, the image is generated by projecting a laser on a thin layer of smoke or fog. Image and sound originate from the same real-time generated source in the computer. This results in a performance where image and sound play equally important roles. The environment challenges the audience to change their perspective continuously.