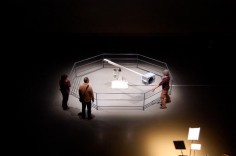 source: evdh
Edwin van der Heide is an artist and researcher in the field of sound, space and interaction. He extends the terms composition and musical language into spatial, interactive and interdisciplinary directions. His work comprises installations, performances and environments. The audience is placed in the middle of the work and challenged to actively explore, interact and relate themselves to the artwork.
He has presented his work at renown museums and festivals as SMAK – Ghent, Ars Electronica Festival – Linz, Stedelijk Museum – Amsterdam, V2_’s DEAF – Rotterdam, ICC – Tokyo, NAMOC – Beijing, Transmediale – Berlin, SONAR – Barcelona, Taipei Fine Arts Museum, SFMOMA, FILE – Brazil and SONAMBIENTE – Berlin.
Beside’s running his own studio he’s part-time assistant professor at Leiden University (LIACS / Media Technology MSc programme) and heading the Spatial Interaction Lab at the ArtScience Interfaculty of the Royal Conservatoire and Arts Academy in The Hague. He was Edgard Varèse guest professor at the Technische Universität Berlin (2009), won the Witteveen+Bos Art+Technology Award 2009 for his entire body of work. He was an invited artist and guest professor at Le Fresnoy, studio des arts contemporain in France for the year 2011-2012.

Spatial Sounds (100dB at 100km/h) is an interactive audio installation by Marnix de Nijs and Edwin van der Heide. In this engine-powered installation, a speaker is mounted onto a rotating arm that is several meters long. Like a watchdog, the machine scans the surrounding space for visitors. Closer investigation would be tempting fate, with the rotating arm swinging so powerfully round. You hear the impressive sound of the mighty motor revving up, turning faster and faster. You can feel the displacement of air as the speaker whizzes past you, and you had better step back, out of reach. The machine slows down and, when the shock wears off, you start exploring the space, with your movements manipulating the sound it produces. Just don’t get too close! Spatial Sounds (100dB at 100km/h) builds up a physically tangible relationship with the visitor, since it is the game of attracting and repelling between machine and visitor that determines its sound and movement.

Spatial Sounds (100dB at 100km/h) consists of a speaker on a long arm with a counterweight at the other end. The arm can spin, and can be regulated between very slow and very high speeds, with a maximum of 100 km/h. A high-speed distance-measuring sensor is mounted close to the speaker and measures the surrounding space. It scans any objects and visitors in this space. Because it is spinning, it creates a spatial depiction of the space, resulting in a continuously changing, dynamic map, rather similar to traditional radar.

The sound and movements of Spatial Sounds (100dB at 100km/h) are generated in real-time, and the algorithms for generating these are defined very precisely. However, the actual sounds depend very much on what visitors do with the installation. On top of the speaker is a sonar sensor that measures the distance between visitors and objects and the speaker. The sensor takes its measurements from a beam facing away from the speaker, and there is also an angle sensor mounted on the axis of the installation. The data from both sensors are transmitted to the computer that generates the sound. When the installation is placed in a room, it first learns the shape of this room while it is still empty. In this way, it can distinguish between people in a space and the space itself. Thereafter, the computer is able to recognize the various visitors to the space.

Spatial Sounds (100dB at 100km/h) reacts in different ways to its visitors. It can react with movement and/or sound to the behavior of individuals or to visitors in general. And besides reacting to visitors, the sound is also directly related to the speed of the arm and the shape of the room around it.