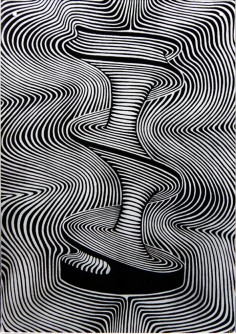 Egle Rakauskaite is perhaps best know for her performances involving her own body, however she asserts that she rarely performs herself, and usually hides from the camera. That is certainly not the case with her 1996 installation, In Honey, nor her 1998 piece In Fat. In both pieces, the artist appeared before the audience, naked and almost embryonic, lying in honey or fat, respectively. As she said herself, it simply wasn’t possible to find someone to do these pieces for her. And I would argue, as well, that they wouldn’t have been nearly as powerful if she had.

For her 1996 installation In Honey, the artist constructed a platform made of a cotton sheet, stretched across a platform, on which she laid, partly submerged in honey. Honey plays a large role in the Lithuanian national cultural identity. It is not only a national product, but also used for its medicinal and healing purposes. Mead is also a traditional alcoholic drink, made from honey. Furthermore, it was Joseph Beuys who acknowledged the mystical properties of honey – a product made from what he saw as the model of a perfect community: bees. In Egle’s piece, honey becomes the amniotic fluid, and the artist is able to breathe through a tube that effectively becomes her umbilical cord.

In In Honey the artist’s body is not visible to the viewer, who sees her from below, through the sheet. In In Fat, she also plays with the idea of invisibility, as in this video performance, the artist reclines in a glass tank that is filled with animal fat; she is completely submerged, and once again a breathing tube enables her to stay alive. The video plays on an endless loop, and as time passes, the fat congeals, further concealing the artist’s naked body. The sound of her breathing is amplified, which conjures a number of associations, from a person on their deathbed being kept alive by respirators, to a bizarre medical experiment.

In both of these pieces Egle reverses the typical presentation of the female nude. While in In Honey she is placed in a substance that is pleasing and sweet, her placement of both the honey and her body in it cause it to resemble a bodily fluid not fit for consumption. Likewise, the naked body in congealed fat – the interior literally externalized – creates a feeling of repulsion and the abject, yet at the same time, the opaque and blurry image is also aesthetically pleasing.

Egle’s work is one of the few examples of female body art in Lithuania. While not overtly feminist in nature, her work, and her biography, speaks of a patriarchal Lithuanian society that persists to this day. In fact, only recently is there an artist-activist group in Lithuania that deals with issues of gender – Cool Turistes.

A 1996 live sculpture, Trap. Expulsion from Paradise raises the issue of the female in contemporary, post-Soviet Lithuanian society more overtly. A dozen young girls dressed in white confirmation dresses stand locked together, with their hair in traditional braids, each one interwoven with the next one’s. After a while, they cut themselves free and leave the stage. The performance reflects the traditional role of women to be submissive and stay in their place, however these girls are able to break free. The title could also refer to the promise of egalitarian “paradise” under the Soviet regime. The fate of these girls is a loss of innocence as they enter into this new post-communist world.

The artist addresses a range of issues in her work, focusing not solely on gender, but on other pressing issues such as exclusion from society, the Lithuanian national cultural identity, the EU and Lithuania’s entry into the Eurozone (scheduled for 2015), as well as the struggle to survive as an artist in contemporary Lithuania. For example, in a recent interactive performance she created a white coat covered with colored dots – the type that are affixed to a wall label in a gallery when a painting is sold. She created a series of interactive performances with the viewer, asking them to blow up a balloon, and presenting them with a bag with this dot on it, and asking them to guess what is inside (a spotted coat). “There is no art market in Lithuania” was written on some of these items in Lithuanian, and the entire piece, which took place at an art fair in Lithuania, was meant to draw attention to this fact.

As an artist, Egle shows great concern for pressing issues in the world surrounding her, whether that is the local situation for artists in her country, or more global issues related to gender and the body.
.
.
.
.
.
.
.
source: culturebasenet

Egle Rakauskaite is a leading Lithuanian artist, recognised for her unique and individual works which combine qualities of purity, intimacy and emotional depth. She was born in 1967 and graduated from the Vilnius Academy of Arts in 1993. Trained as a painter, she initially rejected the medium, drawn to unconventional, perishable materials such as chocolate, hair and strawberries. Her work has since moved into performance and video, with a documentary strand. She was selected to represent Lithuania at the 48th Venice Biennale in 1999. She has been awarded important international bursaries including ArtsLink fellowships in the USA in 1998 and 2000 and a residency at Akademie Schloss Solitude in Stuttgart in 1998.
Egle Rakauskaite is a leading Lithuanian artist, prominent on the world scene for her highly individual and memorable works. Born in 1967, she studied painting at Vilnius Academy of Arts and graduated in 1993. Described by critic Lolita Jablonskiene as “a unique artist, who does not follow any current trends of Lithuanian art”, Rakauskaite works in various media (video, performance, photography, making objects), free to associate and assemble them in different configurations as the project demands.

In the early years of her career, she made objects out of unconventional and perishable materials such as chocolate, jasmine flowers, human hair, honey and fat. As she states, “these materials were used to protest against paint and canvas. Many critics attributed this interest in unconventional materials and also some of the images I constructed to my interest in feminist art. However, I think that at present the differences between male and female creation are not that visible any more. It is important that the art work opens itself to the consciousness and sub-consciousness of the viewer”.

Critic Lolita Jablonskiene characterises Rakauskaite´s work as “conceptually pure and clean” while also “emotionally very impressive”. She sees this paradox as emerging from the use of “non-traditional” materials which “provoke some unusual, puzzling sensations”. And yet, the works evoke a private human experience, a sense of intimacy.

Rakauskaite views her art works as sentences spoken within the language of contemporary life. In a desire to communicate contemporary life she has moved into video and photography and engaged with contemporary society. During an ArtsLink residency at Out-North in Anchorage, Alaska in 2001, she interviewed elderly people on their lives and how they might have been lived differently. Again, in Germany, Russia and Lithuania she interviewed elderly inhabitants on the same question. The work was presented as a video installation “Another Breathing” in 2002 at Mare Balticum in Denmark. The participants´ answers are a series of striking statements strongly linked with national self-perception.

Egle Rakauskaite has initiated projects which have matured as they are presented and re-presented in different locations. Her live sculpture “Trap, expulsion from Paradise” was created in 1996 and figures a dozen young girls dressed in white confirmation dresses with their long hair braided into a tight net that binds them together in a circle. The title alludes to the expulsion from the enforced “Paradise” of a common fate under the Soviet regime. This work has brought the artist her greatest success and has been revived several times (in Vilnius, Warsaw, Istanbul and Zagreb). Critic and curator Lolita Jablonskiene describes how the work “opened the deepest subtle poetry of virginity, once shining with modesty and nobility, sometimes glistening with beauty and arrogance or pulsating with philosophical nuances.”

Egle Rakauskaite was selected to represent Lithuania at the 48th International Venice Biennale in 1999. She has participated in many other significant international exhibitions and her work is widely exhibited in Europe. Major shows include the Baltic Art Centre´s “Presence Balte: The Human Project” in Visby, Sweden, Athens and Barcelona and the “Baltic Security” exhibition at Arlanda Airport in Stockholm. Forthcoming exhibitions in 2003 include solo exhibitions at the National Centre for Contemporary Arts in Moscow and the Contemporary Art Centre in Vilnius and group exhibitions at Frankfurter Kunstverein (“Nation”) and the National Museum Szcecin in Poland (“Extra Strong Super Light”).

Rakauskaite has been selected for high level international artists´ residencies: Civitella Ranieri Centre in Italy, Akademie Schloss Solitude in Germany, ArtsLink residencies in the USA at the Fabric Workshop and Museum in Philadelphia and Out-North in Alaska. She was shortlisted for the Visiting Arts/Spike Island International Fellowship 2002 on the nomination of Lolita Jablonskiene, curator and art critic.

In 2002, she was a delegate to the European Cultural Parliament, a forum of artists and critics, which met in Bruges to debate issues of identity, diversity and politics.