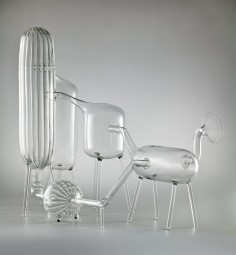 As the industrial revolution began, the industrial processes were limited in space. However, the companies had often much free space where the machines were housed. Over time, the situation has changed. Nowadays, the trend is clear with the production hall is getting smaller, the manufacturing processes – mechanized. Collapscapes was inspired by this fact. The glass exhibition and films on the topic were presented in Brussels and Geneva. Futuristic glass compositions reflect a chemical factory, funnel-mining, gas tanks. These compositions reveal the typical features of modern industrial architecture. Visitors to the exhibition will also be presented with 3D maps, drawings and films.

The project was supplemented by a short film. Collapscape is not a product of Hollywood, but rather a modern art that followed, reflecting the industrialization in Hollywood. The glass exhibition focuses on the architecture and not the history of the industrial revolution. Alongside the exhibition, a software program Socrates also presented. The program writes dialogues. Collapscapes, a project of El ultimo grito Design Studio, researching the role of design and presents the technological advancement in film production and communication.

The Design Studio El ultimo Grido was founded by the designers Rosario Hurtado and Roberto Feo. The London-based office investigates the relationships between architecture, culture and technological progress. Her work is now recognized throughout Europe. Two years ago, the duo has established a network where research articles are published. Anyway, we are thrilled by their creativity – especially the clever combinations of several means of expression – 3D short films, art and software programs fascinated us.
.
.
.
.
.
.
.
source: facebook
Rosario Hurtado and Roberto Feo form the post- disciplinary studio El Ultimo Grito. The studio’s work spans across a multitude of platforms, and shows a range of international clients, museums and organizations. In 2010 they founded SHOPWORK and POI, an independent publishing, research, education and design platform.

El Ultimo Grito’s work continuously researches our relationships with objects and culture. ‘Imaginary architectures’ (2011) are delicately formed glass objects, creating an urban vista which includes a shopping
mall, airport, estate, building and station. They form propositions for the social, material and spiritual elements of cities. These ‘structures of anything’ allow one to probe, question and speculate upon the relevance and meaning of these spaces in our lives.