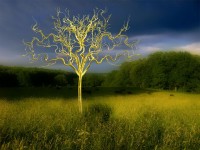 The natural world can be experienced on many levels, from the reality of a mountain to the ethereal essence of living beings. Trees, specifically, have always played a major role in my appreciation of nature. Trees produce the oxygen needed for our breath; we provide carbon dioxide for the trees…. a lovely symbiosis.

Forests and trees have also played a prominent role in many folktales and legends and have been given deep and sacred meanings. They are seen as powerful symbols of growth, decay and resurrection. But, with the depletion of forests and the resulting impact on humankind, how we respond will determine our future. In this series I am addressing my concerns by transplanting replica trees into the natural world. These trees take the form of a constructed likeness or of a ghostly apparition. One is artificial, the other a spirit form; both represent the transformation of nature.
.
.
.
.
.
.
.
.
source: designworldse
Dessa verk av konstnären Ellen Jantzen omvandlar naturen och jorden till ett konstverk med träd innan människan började påverka dess utseende. Men konstverken representerar också hur naturen förändras med människans hand.

Hon leker även med tanken på hur det skulle se ut om de växte på extrema platser så som öknar och slätter.
.
.
.
.
.
.
.
source: ragazinecc
The web is filled with a wealth of photographic material, some charming, some ‘anyone could do’, some that takes you by the shoulders and shakes you awake, some that puts you to sleep. Ellen Jantzen’s photographs call you back, like the memory of an event you can’t shake — images that cling, bringing to mind past events, and casting light on an unknown and mysterious future. Some reviewers speak of her work as an artistic exploration of quantum mechanics; one-hundred years ago her work would have been proof enough that spirits exist. Whatever your experience of Jantzen’s parallel universe, we trust you’ll take it with you.
I have always been interested in alternate states of reality, but looking over my last few series, those initiated and completed since moving to the Midwest from California, I see that I am also dealing with “loss” in some form; loss of friends, home, youth, and the ultimate loss, loss of life. Death transforms us; reality shifts, but to what?
I am intrigued with how a person adapts to losses in their lives — how they are absorbed by events and changed. How does one experience loss? Catastrophic losses usually have a face; think war photos, photos from the World Trade Center, crashes of various sorts; but I am interested in personal loss. What does loss look like?
I set about to address these issues through a photographic photosynthesis in this body of work — choosing photography as the medium to help me reveal, and at the same time enshroud, truths.
In this work, I have placed my husband (Michael) in various environments where a loss of some sort has recently occurred. One of these locations is the interior of a house designed by Michael and built by both of us for his mother about 30 years ago. The structure has gone through a radical evolution from its contemporary inception to being filled with antiques. Recently this home was sold, as mother was moved to an assisted living home. Clearing 30 years of accumulation to reveal the naked interior was transformative. To ultimately see a new family inhabiting the space has left Michael with contradictory feelings of loss and resurrection.
.
.
.
.
.
.
.
source: sculpture
I was born and raised in St. Louis Missouri, USA
In 1992, I Graduated Summa Cum Laude from FIDM (Fashion Institute of Design and Merchandising), Los Angeles California I have a varied background; originally my emphasis was on graphic arts and I obtained my first college degree in this field. I became disillusioned with the basic nature of art for advertising sake and dropped out to become an organic gardener and cheese-maker. I raised goats also. But this became unfulfilling as I really longed for creative outlets and interactions. I then went back to college and got my second degree in fashion design at the Fashion Institute of Design and Merchandising in Los Angeles, California. I became quite fascinated with using fabrics in innovative ways which led me to work for several major corporations designing clothing concepts and products. I also briefly taught product design at Art Center College of Design in Pasadena California. Alas, I again became disillusioned with the corporate/academic climate and longed for something more creative. I have been making my current body of work with digitally manipulated photography for over ten years now and find great satisfaction and excitement each day as I work. This is the perfect marriage of two dimensional graphic sensibilities and my need to create “things”. Because I create ephemeral assemblages to use in my photography, my desire to work three dimensionally is fulfilled also.