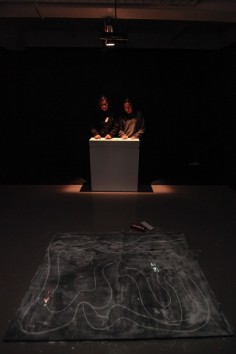 “Interactive chalk cars” is an installation based on a traditional children ́s game, that was originally played on the streets. It uses new digital technologies to review a non-technological game. By using computer vision algorithms and projection mapping, it brings together the real and the virtual. In doing this, we try to combine two playing modes that are usually confronted: the individual video game and the outdoor social game.

The installation has two parts:
– Drawing: where users draw the circuit with chalk. The circuit can be erased or re-drawn at any point during the game. The system dinamically recognices the chalk drawing.
– Playing: ttwo virtuals cars are controlled by users using a hand made controller. Virtual cars crash against each other and against the chalk lines/boundaries of the circuit. The game has no pre-established rules (number of laps, time limits, etc…). The players make them up each time, just as we did when we were children.

Virtual cars crash against each other and against the chalk lines/boundaries of the circuit. The game has no pre-established rules (number of laps, time limits, etc…). The players make them up each time, just as we did when we were children.

Abstract:
“Interactive Chalk Cars” is an installation-based video game. A chalk circuit is constantly scanned by a computer vision system. The computer builds a virtual copy of the circuit and projects it back to the physical world using projection mapping techniques. Users can play a Scalextric-like game, in which virtual cars interact with a real circuit. Projected cars can collide with each other or be affected by the chalk trails. The installation uses the computer vision library OpenCV, the physics library Box2D together with openFrameworks, and MadMapper.
The video game is inspired by traditional racing games that use bottle cap cars. The project aims to appropriate playground games objects and dynamic to create new digital experiences. Playground games have some interesting features that can inspire new ways of creating more engaging video games and interactive installations. The crucial features of games as “Interactive Chalk Cars” are their adaptability to different environments and the organic generation of rules and play models.
Biography:
Espadaysantacruz Studio is a creation and management collective of interactive and visual projects based in Madrid since 2008. Our objective is the development of artistic practices associated with new technologies for interactive softwares, multimedia installations, mapping projects, augmented reality, and data visualization.
The studio is led by three professionals in audiovisual, new media, photography, cultural management, arts education, and technology industries.
.
.
.
.
.
.
.
source: espadaysantacruz

ESPADAYSANTACRUZ is a creative studio specialized in generating new interactive and visual experiences. Based in Madrid since 2008, we design projects where technology allows us to bring creative ideas to a new aesthetic dimension.

Our ongoing research makes every project unique. We are involved throughout the creative process, from the research stage to the manufacturing of the final product, because this is how we manage to create works which are alive and have their own personality.

We work with agencies, production companies, businesses and cultural organizations which are trying to find new ways of communication by firmly betting on innovation and creativity. We work with those who see, as we do, a new way to convey their ideas in the countless technological possibilities of our time.

The studio has four members who are professionals with different backgrounds in the fields of information technology, audiovisual creation, photography and cultural management. We also rely upon a large team of collaborators with whom we share the same vision of work and visual experimentation.

Ph.D in Logic, CWI Amsterdam. Professor at Universidad Complutense of Madrid, since 2005. He is also studying Philosophy at the National Distance University of Spain, as well as obtaining his Advanced Studies Diploma in Fine Arts at the Universidad Complutense of Madrid, with the title: From analogue to digital logic. The Sublime 2.0: the return of the sublime in contemporary visual arts, where he analyzes the aesthetic basis of digital art. He has been a visiting researcher and lecturer at different universities all over the world, such as Aalto University in Helsinki, Amsterdam University or the Universidad Nacional de Córdoba Argentina, and has conducted workshops in specialized centers worldwide.

Philosophy Graduate and Advanced Studies Diploma from the I.T Department at the Universidad Complutense of Madrid, where he was a lecturer from 2005 till 2010. Since 2006 he teaches lighting and image analysis at EFTI school of photography. He has worked as director of photography and film maker in advertising campaigns and music videos for firms such as Axa, Shell, Red Bull, Reina Sofía Museum (MNCARS), or bands like Love of Lesbian, Iván Ferreiro, Dolores, Void Camp, Polly Scatterwood, or Heaven´s Basement.

Humanities Graduate from the Universidad de Navarra. She is cultural manager and curator, specialized in photography and emerging art. In 2003-2005 she obtained her Master in Cultural Management: music, theatre and dance at the ICCMU and SGAE; and in 2006 her Master in Art and Communication at the Universidad Complutense of Madrid. She has studied professional photography at Escuela Flash. Since 2008 she is the director of Encontexto, photography encounters, currently in coproduction with La Casa Encendida Obra Social Caja Madrid.
She has worked in direction, coordination and consulting for different institutions and cultural organizations. From 2009 to 2011 she coordinated and directed projects at La Fábrica Gestión+Cultura. She has also worked at the Nave de Música Matadero Madrid, Museo del Traje and CIPE, Spanish Ministry of Culture, film festivals, theatre distribution; she has taught cultural management applied to photography at the IArt, Instituto Superior de Arte de Madrid, and she has been a lecturer in various conferences on art and management. After several years working for La Fábrica she decided to alter her course and become a member of Espadaysantacruz Studio.

Media and Communications Graduate. He became interested in photography while studying to become Advanced Technician in Image at Escivi (Escuela de Cine y Vídeo de Andoain). In 2009 he received a prize for a project he developed during the 50th anniversary of the Cuban Revolution. The following year he continued his training and attended workshops with prestigious national and international artists. In 2010 he moved to China to produce a new series of photographs. The resulting work was awarded one of the prestigious Roberto Villagraz grants. His last work War Theater was finalist at Descubrimientos in PhotoEspaña and it has been shown at several international festivals.