At last I am free 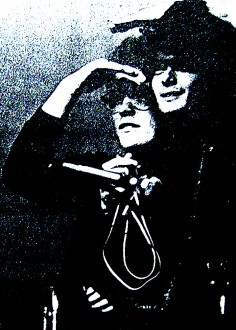 The Duo Goebbels/Harth (1975–1988), combining German composer, music-theatre director and keyboardist Heiner Goebbels and German composer, multi-media artist and saxophonist Alfred 23 Harth became famous for its adaptation of and departure from European composers, especially Hanns Eisler, implemented in a provocatively fresh manner into structured free improvisations and deploying content from areas beyond music. The duo was nicknamed the “Eisler brothers” by music critic W.Liefland. They later also experimented with different genres and sound collages, including electronic devices. The duo played in many international festivals and concerts in cities as diverse as Tel Aviv, Zagreb, West and East Berlin and South America.

History and music
Before the duo started, Heiner Goebbels especially admired the capabilities of Don Cherry, with whom about 15 years later he engaged in his project “Der Mann im Fahrstuhl,” adapted from Heiner Müller. In 1972, Goebbels moved from Landau to Frankfurt/Main to study sociology and complete a work on the German/Austrian composer, Hanns Eisler. Meanwhile, Alfred 23 Harth was finishing his degree as an art teacher at the university in Frankfurt/Main, as well as his conscientious objector’s civilian service in 1973-4, and in 1975 returned after three months of activity playing with the loft jazz scene in New York (together with Jay Clayton, John Fischer and Perry Robinson). Previously, he had formed the groups Just Music (1967–72) and E.M.T. (1972–74). He was then searching new musical companionship in the local Frankfurt music scene and joined a jazz-rock band comprising Goebbels on keyboards and drummer Uwe Schmitt, later in Gestalt et Jive, that shortly after broke apart while leaving some previously booked concerts open. Harth encouraged Goebbels to play one of the remaining concerts, freely improvising in a duo with him. They exchanged information and during a rehearsal Harth played the melody of some Eisler songs on saxophone, which Goebbels accompanied on the piano. They continued improvising freely, thematically deconstructing Eisler’s music just to have it emerge again in a twisted manner. They also extended the range of their instruments.
A first Duo Goebbels/Harth concert took place in 1975 at the Darmstadt main theatre. The duo’s history would have stopped here if they had not been asked to contribute a special event for an opening for an artist friend a few weeks later in Frankfurt/Main. Once again Goebbels and Harth played their fresh repertoire of music at the “Ersatzausstellung” by Vollrad Kutscher, from which photographs found their way to covers of the later LPs and CDs of the duo Goebbels/Harth. Christoph Anders, a later member of the “Sogenanntes Linksradikales Blasorchester” and Cassiber, was in the audience and since then became a friend to the two musicians. The enthusiastic reaction of the audience to their humorous and skilled diversity lead to more concerts for the newly formed duo Goebbels/Harth. Soon they contacted Jost Gebers from FMP, whom Harth knew from his LP production with E.M.T. and arranged a live recording session at the “Flöz” in 1976 in West Berlin, which emerged as the LP “Vier Fäuste für Hanns Eisler” which boosted the duo’s recognition. The same year, Goebbels started formal music studies at the Hochschule für Musik und Darstellende Kunst Frankfurt am Main.
In 1978 the duo played at the Deutsches Jazzfestival Frankfurt and started to work on a second LP “Vom Sprengen des Gartens” for SAJ/FMP (1979), where they also worked in a manner removed from their European heritage by implementing ideas from German composers, such as Bach and Schumann in their free improvisations. Joachim-Ernst Berendt called this LP “one of the most important German jazz LPs in the 1970s.”[citation needed] Around 1978-79, Goebbels and Harth started to compose for the theatre as well as film music for German director Helke Sander.
In 1981, Berendt together with the duo produced the LP, “Zeit wird knapp” by including love poems and ballads from Bertolt Brecht, for which they recruited vocalists Dagmar Krause and Ernst Stötzner. The duo then artistically shaped the German new wave music/Neue Deutsche Welle in their style with their LPs “Indianer Für Morgn” and “Frankfurt/Peking” by also using synthesizer, electronic devices, and extended instruments. They made a short adaption of the Revolutionary opera Pekinese, which in 1996 led Japanese avant-garde musician Otomo Yoshihide to incorporate samples of it into a project with his group Ground Zero. The duo then carried out two tours to South America with the help of the Goethe Institute.
Around 1983-84, the creative spirit of the pair diminished. In 1987, Harth had been playing reeds and brass instruments in Goebbels’ performance “Der Mann im Fahrstuhl” at the Festival International de Musique Actuelle de Victoriaville in Victoriaville, Quebec, Canada ( together with Arto Lindsay and Heiner Müller). At the same festival, a final significant Goebbels/Harth event took place through a live recording, which became a kind of synopsis of the duo’s entire repertoire over its long history. After a few more duo events and the unreleased last recordings “Duos für Fritz,” Harth disbanded the duo in 1988.
In 1991 together with Akashi Masanori (evva) Harth produced the best-of CD “Goebbels Heart,” for which he had asked artist and writer friend Wolf Pehlke to put his image from the book of art works, “Goebbels Heart” (1986) on the CD cover to symbolize that the duo’s work had been definitively concluded.
In 2007 Harth together with Chris Cutler produced the CD reissue of the two first duo LPs.
.
.
.
.
.
.
.
source: youtube

By Duo Goebbels/Harth = Heiner Goebbels – church organ, Alfred Harth — tenorsax.
This is one of a couple of unreleased duos which had been recorded by the request of Alfred Harth’s father at Peterskirche Frankfurt Main in 1988.
.
.
.
.
.
.
.
source: heinergoebbels

The composer and director Heiner Goebbels (*1952) belongs to the most important exponents of the contemporary music and theatre scene. His compositions for ensembles and big orchestras published by Ricordi Munich are currently performed worldwide as well as several of his music theatre works and staged concerts, mostly produced by Théâtre Vidy Lausanne and the Ensemble Modern.
Heiner Goebbels works as a professor at the Institute for Applied Theatre Studies of the Justus Liebig University in Giessen (Germany) and is President of the Theatre Academy Hessen. From 2012 to 2014 he is the artistic director of the International Festival of the Arts RUHRTRIENNALE.
Upcoming performances can be seen in the Calender.
The Archive offers a large number of articles, reviews, pictures, a catalogue of works, the performance history and discography. Most of his CDs are produced and published by ecm records.
The music theatre productions Max Black, Hashirigaki, Eraritjaritjaka, Stifters Dinge and I went to the house but did not enter are in the repertoire of Théâtre Vidy. Schwarz auf Weiss, Eislermaterial, Landschaft mit entfernten Verwandten are in the repertoire of the Ensemble Modern. The London Sinfonietta and the Orchestra in the Age of Enlightenment perform Songs of Wars I have seen and the Ensemble Klang (N) an ensemble version of Walden.
His latest productions John Cage: Europeras 1&2, When the Mountain changed its clothing, Harry Partch: Delusion of the Fury and Louis Andriessen: De Materie are distributed by the Ruhrtriennale.
.
.
.
.
.
.
.
source: yourepeat

Heiner Goebbels is a German composer, director and professor at Justus-Liebig-University in Gießen and artistic director of the International Festival of the Arts Ruhrtriennale 2012 – 2014. Goebbels, who studied sociology and music in Frankfurt/Main, is a composer of ensemble works and compositions for large orchestra, he created several pricewinning radio plays and staged concerts, and since the early 90ties he creates his own music theatre works, which are invited to the most important theatre- and music festivals worldwide. Goebbels co-founded the “Sogenanntes Linksradikales Blasorchester” and avant-rock group Cassiber with Alfred Harth, Chris Cutler and Christoph Anders. They toured extensively across Europe, Asia and North America, and made five albums. In October 1983 Cassiber joined Duck and Cover, a commission from the Berlin Jazz Festival, for a performance in West Berlin, followed by another in February 1984 in East Berlin. Much of his better-known work, however, originated from his close collaboration with the East German writer Heiner Müller, resulting in stage compositions as well as shorter pieces based on Müller texts, such as Verkommenes Ufer, Die Befreiung des Prometheus, or Wolokolamsker Chaussee. Goebbels’ attempts to fill the space between theatre and opera left blank due to traditional genre borderline drawing has led to projects such as “Ou bien le débarquement désastreux”, Schwarz auf Weiss and Die Wiederholung. The political nature of his work is often referred to by critics. His interest in Heiner Müller can partly be explained by the political character of Müller’s texts, as may be the case with his interest in Bertolt Brecht and Hanns Eisler, works by the latter he used in composing his staged concert Eislermaterial. 1998 he also created the music theatre play “Max Black” with words by Paul Valery and others, in 2000 “Hashirigaki” after Gertrude Stein, 2002 his first opera “Landscape with distant relatives”, 2004 the price winning “Eraritjaritjaka” with words by Elias Canetti, followed 2007 by the performative installation “Stifters Dinge” which has been performed more than 350 times in four continents. 2007 followed the staged concert “Songs of Wars I have seen” with words by Gertrude Stein – a commission by the London Sinfonietta and the Orchestra in the Age of Enlightenment, 2008 “I went to the House but did not enter” with the Hilliard Ensemble and words by Maurice Blanchot, Samuel Beckett a.o. In 2012 he created “When the Mountain changed its clothing” with the Choir Carmina Slovenica, and staged John Cage’s “Europeras 1&2” 2012 and Harry Partch’s “Delusion of the Fury” 2013 for the Ruhrtriennale International Festival of the Arts.