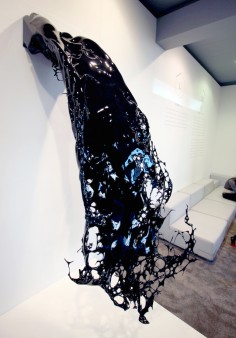 Waterfall Sculpture created using fluids simulation (particle based simulations. These particles are influenced in a multitude of ways by point-based nodes, known as daemons, which can simulate gravity, fluids, water surfaces flow and collision.)
.
.
.
.
.
.
.
.
source: eyalgever

I create sculptures based on sublime moments. These are moments that fill a person with amazement, awe, terror, astonishment, and silence.
They are also moments of pure beauty.

To see something we normally cannot see. To examine states where rest and motion exist together. To explore the boundaries of time.

My sculptures are created from software I have developed. I am influenced by the destructive impact within our environment. Uncontrollable power, unpredictability and cataclysmic extremes are the sources for my work. They inspire, fascinate and remind me of the constant fragility and beauty of human-life. Beauty can come from the strangest of places, in the most horrific events. My art addresses these notions of destruction and beauty, the collisions of opposites, fear and attraction, seduction and betrayal, from the most tender brutalities to the most devastating sensitivities. I oscillate between these opposites.

My ongoing body of works examines the relationship between the simulated events that I create and their physical manifestation. These sublime moments are borne out of simulations and translated as art.

Eyal Gever is dedicated to leading the convergence of technology and art. Eyal has over 18 years experience implementing his ideas into 3D software technologies and server/web-based products, primarily in the area of interactive real time multimedia communication software as well as 3D creation and animation.

Having earned his reputation in the high-tech industry as a visionary, Eyal has received numerous awards for his innovation in multimedia design and technology. Eyal is frequently invited to speak at leading industry events, and has been featured many times in the press, including the cover of the Red Herring, articles in Wall Street Journal, Wired magazine, Newsweek, appearances on CNNfn and others.

Gever had founded and was the CEO of few technology companies – Zapa Digital Arts, Gizmoz and Co founded Daz3D after the merger of Daz3D and Gizmoz in January 2010.

Eyal has 8 patents in Internet multimedia technologies as well as in 3D computer graphics animation technologies, technologies of transmission and propagation of rich media.

I create sculptures that are based on 3D physical simulation I’ve developed.
My ongoing body of works examines the relationship between the simulated events that I create and their physical manifestation.
Objects of a dense and innovative process, my works seem both real and unreal. I investigate the moment and the environmental situation that demarcates the boundary between an event and its representation.
Each simulation that I create is both animated as well as few frames are fabricated and materialized into physical sculptures, built layer by layer using a type of 3-dimensional printing.