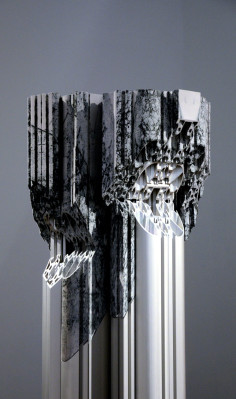 source:offrampsciarcedu
Coral Column was developed for the exhibition “Close-Up” at the SCI-Arc Gallery. The central question posed by the curators was how digital technology altered the approach to architectural detail. The way we addressed this question touches on the points raised by the editors of Offramp for the issue Guise. In particular, we were interested in dealing with the dichotomies of real/fake and mundane/special through physical means of representation. The column with all its disciplinary connotations seemed to us a particularly well-suited object to explore.

The history of architecture can be reasonably traced through the development of the column and its many stylistic variations. Over centuries columns projected to varying degrees eternal qualities such as truth, justice, and beauty. These fictions were communicated through physical features such as size, proportionality, the detailing of its components and so forth. The fiction to end all fiction was introduced by Mies’ Barcelona column with its use of machined parts and precious coating. The “liberated” image of the column was now fully in service of the modern narrative of a universally legible architecture rather than one contingent on time, culture, class, etc. The demystification of architecture and its components seemed complete.

The advent of the digital introduced a different kind of image-making capacity, in which the ethic of purity, as expressed in reproducible machine parts, seemed no longer necessary to uphold the modern tradition. Enlightened notions of “progress” could now be maintained with more complex geometries as long as the reference to technology as the primary enabler was kept intact. At least that was one of the prevailing digital narratives. However, to us the digital had quite a different appeal. We were always interested in the ability to conjure up new cultural images by merging material and analog qualities with the processes of the digital. As a consequence, the question of what constitutes the real (and thereby the fake) became endlessly more contradictory and interesting. Coral Column arose in response to this question.

We designed the column with a set of distinct and seemingly oppositional qualities in regards to its materiality, fabrication technology, and aesthetic/political associations. At first glance, the column appears like a unique and precious artifact but it can easily be reproduced and quickly assembled. The column shaft is made by multiple stock aluminum extrusions, which have been combined together into a single object. Oblique cuts into the extrusions reveal the inner structure and display highly ornamented features. Through these cuts we distinguished column base, shaft, and capital with a nod to the classical ordering systems and transformed the everyday quality of the extrusions from an ordinary to an extraordinary one. As a result, the image -or guise- of the aluminum as a mundane and pragmatic building component is forced into tension with the arabesque aesthetic displayed in its otherwise hidden core.

While the column’s shaft was made entirely with analog means, its capital was produced by digital fabrication. It echoes the “found” ornamental qualities within the sliced extrusions in a digitally enhanced form. The capital is made of a pixelated powder composite but appears solid, uniform, and heavy. Its marbleized color pattern evokes the ancient craft of stone carving. By extending the sectional patterning of the oblique cuts into the powder print, the extrusion structure transforms into pure ornamentation. Deep-seated categorical beliefs that structure relations between image, form, and content are reversed. The mundane, as represented in the metal extrusion, is made special and finally elevated (through the capital) into a pure and autonomous design expression. At the same time, the powder capital is the most fictitious and “fake” part of the column. It represents neither structural expression in its ornament, nor does it refer to a deeper truth.

In a sense the capital of Coral Column becomes the ultimate guise, not so much in its concealment of a particular hidden real, but rather by exposing the shifting alliances and multiple fictitious realities upon which the architectural image has always rested.
.
.
.
.
.
.
.
source:designupennedu
“Close-up examines the impact of digital technologies on the architectural detail and the traditions of tectonic expression associated with it. An often overlooked condition of digital design technologies is the ability to design objects through continuous degrees of magnification. The consequences of this very basic fact are more significant than we may realize. The traditional premise that some architectural ideas only reside at standardized scales of magnification at this point is nostalgic.

This exhibition proposes that technological advancements have resulted in a transformation of how architectural ideas unfold at different degrees of resolution and that tectonics might mean something very different in the 21st century. Related to this new power of computer assisted observation for both the author and the audience of architecture is the blurring of the boundaries between the virtual and the real and the mutual imbrications of concepts with materials. Ranging from the cinematic to the clinical, the transition from the architectural detail to the architectural close-up implies new formal logics and new modes of reception. This exhibition will survey some of the pioneers of this way of thinking about architecture after the digital and examine recent work by emerging architects that are continuing this important investigation.
.
.
.
.
.
.
.
source:designupennedu
Ferda Kolatan is an Associate Professor of Practice at PennDesign and the founding director of su11 in New York City. He received his Architectural Diploma with distinction from the RWTH Aachen in Germany and his Masters in Architecture from Columbia University, where he was awarded the LSL Memorial Prize and the Honor Award for Excellence in Design. Kolatan has lectured widely and taught design studios as well as theory and fabrication seminars at Columbia University, Cornell University, Rensselaer Polytechnic Institute, University of British Columbia, California College of the Arts, Washington University, Pratt Institute, and the RWTH Aachen. He is also a co-author of the book Meander: Variegating Architecture (Bentley Press, 2010) and was selected as a Young Society Leader by the American Turkish Society in 2011.

su11 is an award-winning practice with international acclaim. It received the ICFF Editor’s Award for Best New Designer and the Swiss National Culture Award for Art and Design in 2001. In 2009, su11 was chosen as a contributor to Journey to Zero, an initiative towards a Zero Emission future and sponsored by Nissan and TED founder Richard Saul Wurman. It was also nominated as a finalist for the prestigious Chernikhov Price both in 2007 and 2010 and the MoMA/PS1 Young Architects Program in 2008. su11 has exhibited work at such venues as MoMA, Walker Art Center, Vitra Design Museum, Beijing Biennale, Carnegie Museum of Art, Archilab Orleans, Art Basel, Documenta X, Artists Space NY, PS1, Istanbul Design Biennial and the Siggraph and Acadia conferences. Publications include Archilab’s Futurehouse, Space, Monitor, L’Arca, Arch+, AD, Dwell, Le Monde, the New York Times, the Los Angeles Times, Suedeutsche Zeitung, and the Washington Post.