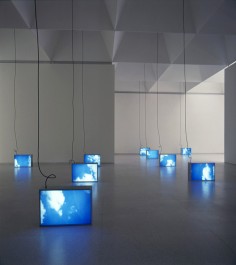 “ Art is a part of life pregnant with meaning. ”
Jean-François Brun and Dominique Pasqualini.
.
.
.
.
.
.
.
.
source: kaleidoscope-press

I owe the discovery of IFP to the conjunction of a disillusioned, contemporary-art hating tablemate and the eminent Los Angeles light and atmosphere artist Robert Irwin. While at a post-opening dinner for the latter in New York last November, I found myself discussing my tablemate’s splenetic withdrawal from the world of contemporary art. At a certain point, the subject shifted to the question of withdrawal tout court, and he brought up IFP, at the time, a complete artistic unknown to me. “Never understood what the fuck those guys were doing,” explained he with inimitable New York charm. “But I suspect that they are the missing link for much of what goes in contemporary art in France today.” Apparently, IFP had dropped out around the mid-nineties, totally disappeared, such that my interlocutor, who had been friends with them, had entirely lost contact. “If ever you find out what happened to them or what the fuck their work was about,” said he before parting, “Let me know.” Soon thereafter, and through a series of slightly less picaresque, but no less valuable circumstances, I learned of their then current retrospective at Mamco in Geneva, L’Épreuve du jour, and hastened to organize a trip once back in Paris.

IFP, Information Fiction Publicité was a collective composed of Jean-François Brun, Dominique Pasqualini and Philippe Thomas. The collective worked for approximately 10 years, from 1984 (in 1985 Philippe Thomas quit the collective, embarking on a career of his own) to 1994, at which point they disbanded, opting to pursue non-art related careers. Briefly active in New York, the duo moved back to Paris, where the majority of their activity and subsequent recognition took place. L’Épreuve du jour was their first and only retrospective, and offered a precious opportunity to consider a broad, extremely well-curated selection of their rather elegant, if decidedly generic work. Essentially preoccupied with the social space where public advertising totally blurs into the private life of the individual, and, perhaps more importantly, the (then) extremely fashionable issues of authorship, the work consists largely of three parts: their logo (featured on sculptures and light boxes); images of the sky; and advertising in various forms.

A good example of the latter would be Information Fiction (Publicité) (1998-2010). This piece was comprised of a selection of advertisements (posters of varying sizes), which were currently visible in the city, and which covered almost the entire length of one wall. Directly opposite of this work could be found Grande Surface (1987-2010), vast billboard-size, green monochrome wall painting. At the bottom right corner of the painting was located the collection’s logo in white, next to a fold out seat, as in a movie theater, upon which a single viewer could sit and contemplate the sprawling frieze of re-contextualized, public imagery before them, while activating, for the benefit of other viewers, the field of green directly behind them. Together, the two offered a rather wry commentary on Duchamp’s famous observation that the viewer completes, who in this case, is literally instrumentalized by the work in order to achieve said completion. Le plot (1985), a few examples of which could be seen scattered through the exhibition, seemed, at least in theory, to invite a similarly instrumental engagement/exploitation. These were basically small, round concrete plinths, whose center’s featured mechanically rotating, metal plates, upon which was painted the collective’s logo. Difficult not to imagine a single viewer obediently standing on one and, no doubt, expressionlessly, rotating like a human sculpture.

The motif that dominated the exhibition– the sky– (the group’s signature image) just happened to be the most winsome motif of the exhibition. Parceled up into light boxes, on folding partitions, and in a film, the presence of the sky suffused the spaces with an extraordinary and inhuman, as in emotionless calm. In a long, narrow room could be found Ciel, station (1988), an overhead series of ten light boxes with images of cloud spattered skies, spaced apart at symmetrical intervals. Evocative of either a train window or say, a film strip, the installation was cause, despite its elegant beauty, for a highly unnatural feeling. One had the sense that the sky, and any romantic significations normally associated with it, had been deprived of any content whatsoever, rendered completely vacant, like a screensaver. A sense of the romantic nevertheless crept back into Studio Paramount (1985-2010). This video projection covered the entire expanse of a wall, horizontally and vertically, inevitably bringing to mind James Turrell’s permanent installation Meeting (1986) at PS1 and Felix-Gonzales Torres’ billboards.

Otherwise, numerous examples of Ciel (paravents), 1991– large, three part partitions (think Japanese room dividers) on rollers, whose surfaces were covered with imagery of the sky– could be found throughout the exhibition. Doubling as bad scenographic devices and provisional sculptures, they had a way of theatrically compressing space, as if the introduction of the sky into a room paradoxically halved it. But it wasn’t until seeing a vertical, human-sized light box of the sky, and after seeing a few images of inhuman spaces such as a desertscape and a moonscape pasted directly unto the wall, that a preoccupation with a colonization of space began to assert itself. Indeed, the light boxes of the sky themselves testified to the commodification of the one thing that would seem to put up an indomitable resistance to being packaged and sold. And yet here it was, streamlined into luminous and entrancing segments of its own representation. Whether or not such a critique was initially part of their project is hard to say– they were notoriously uncommitted to any critical position, aside from that of abjuring traditional notions of authorship. That said, if time has potentially made a subtle critique of commodification within the work more apparent, then one other latent aspect becomes even more apparent than that: the memento mori. for what do these pure, artificial representations (preservations) point to other than the extinction of that to which they refer? Granted, these were made at the end of the Cold War, post Soylent Green (1973), and above all, post Blade Runner (1982), but the specter of ecological catastrophe, now psychically, culturally and historically pushing down on them, has become a thoroughgoing box office hit, not to mention an imminent reality. However, unlike their spectacular Hollywood counterparts, the sense of doom they both compactly and vastly invoke is wrapped in a peaceful and impenetrable silence.
.
.
.
.
.
.
.
.
.
source: parisetudiant