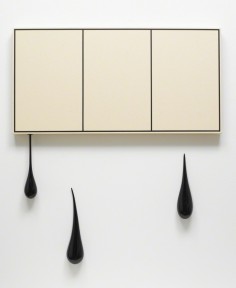 source: accessibleartny
Fred Wilson is a jack of all trades. He is an artist and curator whose career has spanned the past four decades. Never boring, his work challenges viewers to think deeply about the multi-layered art before them . In 2003, Wilson represented the United States at the Venice Biennale. I was lucky enough to see that show entitled, “Speak of me as I am,” a line from Othello. In the Jeffersonian pavilion Wilson included imagery that might, at first, appear to be linked to American slavery. However, upon closer inspection, Wilson was filling the space with art from modern day Venice. There were black figures which Venetians would recognize from a doge’s tomb in the Frari Church. He examined the history of the Moors in Venice when he found figures on doorknockers, in the Teatro La Fenice, and in the paintings of the Accademia Museum. He explained that a Tiepolo painting from 1725 had been extremely influential in his becoming an artist. In this work, Tiepolo puts himself in his studio along with his wife and his black assistant. This was something that Wilson had not seen before and for him, it made an African’s connection to art real.
The rotunda in the entryway housed a beautiful black glass chandelier. Murano is the mecca of beautifully blown glass but objects are usually colorful or clear, never black. Having just come from a residency at a glass school in the US, Murano glass seemed a logical step for Wilson. In one room visitors could find objects created for the show as opposed to the other spaces which included works based on found objects placed in different contexts.
Drip, Drop, Plop was made of the same black glass as the chandelier, but the glass formed drips which could be interpreted as tar, tears, or ink. He added eyes to some of the drips playing on the notion of cartoon stereotypes. Including a variety of works was important to him because though he had been creating work for years, it afforded an opportunity for a larger worldwide audience to become familair with his work.
In the late 1970s Wilson took photos in his continued quest for finding the truth in what you see before you. In a show he curated in 1987 called “Rooms with a View” he investigated how different environments alter the way in which works on display are viewed. The works never changed, but their presentation did. He is always reinventing himself and though his art changes, it always demands something of the viewer. He is a fascinating man and a wonderful artist. Keep your eyes out for him.
.
.
.
.
.
.
.
source: blogart21
Fred Wilson was born in the Bronx, New York, in 1954, and lives and works in New York. He received a BFA from Purchase College, State University of New York. Commenting on his unorthodox artistic practice, Wilson has said that, although he studied art, he no longer has a strong desire to make things with his hands: “I get everything that satisfies my soul from bringing together objects that are in the world, manipulating them, working with spatial arrangements, and having things presented in the way I want to see them.” Thus, Wilson creates new exhibition contexts for the display of art and artifacts found in museum collections—including wall labels, sound, lighting, and non-traditional pairings of objects. His installations lead viewers to recognize that changes in context create changes in meaning. While appropriating curatorial methods and strategies, Wilson maintains his subjective view of the museum environment and the works he presents. He questions (and forces the viewer to question) how curators shape interpretations of historical truth, artistic value, and the language of display—and what kinds of biases our cultural institutions express. In his groundbreaking intervention, “Mining the Museum” (1992), Wilson transformed the Maryland Historical Society’s collection to highlight the history of slavery in America.
.
.
.
.
.
.
.
source: nidhiandmegsblog
Wilson discusses the importance of organization and composition of art. He believes a nontraditional way of displaying artwork is artwork itself. Lighting, composition, and structure play a key role in how the piece is understood. Wilson received the MacArthur Foundation Genius Grant in 1999 and the Larry Aldrich Foundation Award in 2003. Fred was also lucky enough to represent the United States. His conceptual art voices his opinions about how people fit together within the world despite color and shape. All of his work has a sadness to it that represents the oppression of many different people. Drip Drop Plop is one of my of my favorite pieces by him because it not only represents a very important subject, but also because its dark glassy look is easy to relate to. The thick tar like black along with the cartoony eyes represents the historical and social issues that Wilson chooses to talk about.