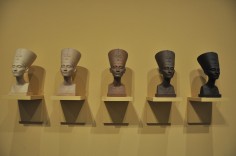 In the survey exhibition of mock museum displays by New York Conceptual artist Fred Wilson, now at the Santa Monica Museum of Art, a row of five busts of fabled Egyptian queen Nefertiti demonstrates the range of reverberations Wilson can get from a simple gesture. Physically, the display is terse. Conceptually, it’s discursive, offering an open-ended analysis for which answers are both provocative and elusive.

Titled “Grey Area” (1993), the piece features five shelves attached to the wall. Each holds a plaster copy of the famous sculptural head of the wife of the New Kingdom pharaoh Akhenaton, which occupies pride of place in the collection of Berlin’s great Egyptian Museum. The sculpture’s significance is slyly underscored by the shelves’ placement high on the wall: Automatically, you look up to it.

Or, rather, you look up to them, since the five heads are not quite the same. The bust at the left is painted white; the bust at the right is painted black. In between are three stages on the gray scale — pale, medium, dark.

The actual bust in Berlin, which has reigned as a standard of beauty for centuries, is famous in part because it retains its original, unrestored colors from more than 3,000 years ago. Wilson, too, has color on his mind.

From a Eurocentric point of view, Western civilization’s ancestry in Egypt is traced to rulers who were white. From an Afrocentric viewpoint, those rulers were black. In the original Berlin sculpture, Nefertiti has richly tanned skin. But is skin color the factor that determines race? What is race, anyway? Are such categories meaningful in any biological sense? Or are they cultural constructions, just like standards of beauty — the kind that museums articulate and perpetuate, purposefully or not?

“Grey Area” was part of a much larger installation called “Re-Claiming Egypt” that was one of very few highlights in the otherwise disastrous 1993 Whitney Biennial. Wilson’s thoughtful attention to nuance is seen in the pointed hyphenation of the word “reclaim.” Here is yet another claim about who we are and where we came from, the complex installation frankly declared — a temporal assertion of considered belief, not an immutable truth.

Museums are built from works of art and artifacts that retain their own authentic power and reality as material objects; however, the ways in which museums deploy those objects are far more uncertain and equivocal. Wilson’s mock museum displays tell stories, just as real curatorial displays do — his just tend to raise fascinating and important questions, a practice that runs counter to our typical expectations of authoritative museum practice.

One inevitable limitation of the show, which was organized by the University of Maryland and is now three-quarters of the way through a three-year national tour to smaller institutions, is that a traveling survey only has room for fragments of Wilson’s often elaborate installations. “Grey Area” survives as a kind of sketch from “Re-Claiming Egypt,” which was a big installation occupying more than one Whitney gallery. At the Santa Monica museum, where “Grey Area” and a second component share a single wall, the full “Re-Claiming Egypt” would have eaten up most of the available gallery space.

Better that than nothing, though. Since 1987, Wilson, 49, has created some three dozen installations utilizing art and artifacts in assorted American and foreign museums of art and cultural history. None has been in Los Angeles.

At least none that I’m aware of. He might have done some we don’t know about. How? The show’s useful catalog recounts Wilson’s inadvertently sardonic “Comment Book Project,” begun in 1996.

“When Wilson visits art museums around the United States, he writes lengthy remarks in the comment book explaining a particular issue, often about cultural sensitivity, that could be improved in the museum,” the catalog explains. “He leaves an anonymous e-mail address and sometimes a telephone number.” As of 2001, when the catalog was published, he had received not a single response to his comments from any museum — despite the obvious difference between his thoughtful jottings and the usual comment-book exhortation, like “Great show!” or “Ugh!”

Admittedly, some of Wilson’s work seems simplistic. “Friendly Natives” (1991) is a group of glass display cases holding a family of skeletons, each one carefully labeled. The labels don’t identify anthropological epoch or geographic locale, but instead blithely state “Someone’s Mother” or “Someone’s Grandfather.” With typical Wilsonian care, each skeleton gets more than one label — Mom is also “Someone’s Sister” — since multiplicity inheres in any issue of identity or cultural history. But it’s a one-hit piece. Once the sudden surprise of reading the label passes, the sculpture doesn’t have anywhere to go. It’s a lot of labor for a minimal payoff.
.
.
.
.
.
.
.
source: accessibleartny
Fred Wilson is a jack of all trades. He is an artist and curator whose career has spanned the past four decades. Never boring, his work challenges viewers to think deeply about the multi-layered art before them . In 2003, Wilson represented the United States at the Venice Biennale. I was lucky enough to see that show entitled, “Speak of me as I am,” a line from Othello. In the Jeffersonian pavilion Wilson included imagery that might, at first, appear to be linked to American slavery. However, upon closer inspection, Wilson was filling the space with art from modern day Venice. There were black figures which Venetians would recognize from a doge’s tomb in the Frari Church. He examined the history of the Moors in Venice when he found figures on doorknockers, in the Teatro La Fenice, and in the paintings of the Accademia Museum. He explained that a Tiepolo painting from 1725 had been extremely influential in his becoming an artist. In this work, Tiepolo puts himself in his studio along with his wife and his black assistant. This was something that Wilson had not seen before and for him, it made an African’s connection to art real.
The rotunda in the entryway housed a beautiful black glass chandelier. Murano is the mecca of beautifully blown glass but objects are usually colorful or clear, never black. Having just come from a residency at a glass school in the US, Murano glass seemed a logical step for Wilson. In one room visitors could find objects created for the show as opposed to the other spaces which included works based on found objects placed in different contexts.
Drip, Drop, Plop was made of the same black glass as the chandelier, but the glass formed drips which could be interpreted as tar, tears, or ink. He added eyes to some of the drips playing on the notion of cartoon stereotypes. Including a variety of works was important to him because though he had been creating work for years, it afforded an opportunity for a larger worldwide audience to become familair with his work.
In the late 1970s Wilson took photos in his continued quest for finding the truth in what you see before you. In a show he curated in 1987 called “Rooms with a View” he investigated how different environments alter the way in which works on display are viewed. The works never changed, but their presentation did. He is always reinventing himself and though his art changes, it always demands something of the viewer. He is a fascinating man and a wonderful artist. Keep your eyes out for him.
.
.
.
.
.
.
.
source: blogart21
Fred Wilson was born in the Bronx, New York, in 1954, and lives and works in New York. He received a BFA from Purchase College, State University of New York. Commenting on his unorthodox artistic practice, Wilson has said that, although he studied art, he no longer has a strong desire to make things with his hands: “I get everything that satisfies my soul from bringing together objects that are in the world, manipulating them, working with spatial arrangements, and having things presented in the way I want to see them.” Thus, Wilson creates new exhibition contexts for the display of art and artifacts found in museum collections—including wall labels, sound, lighting, and non-traditional pairings of objects. His installations lead viewers to recognize that changes in context create changes in meaning. While appropriating curatorial methods and strategies, Wilson maintains his subjective view of the museum environment and the works he presents. He questions (and forces the viewer to question) how curators shape interpretations of historical truth, artistic value, and the language of display—and what kinds of biases our cultural institutions express. In his groundbreaking intervention, “Mining the Museum” (1992), Wilson transformed the Maryland Historical Society’s collection to highlight the history of slavery in America.
.
.
.
.
.
.
.
source: nidhiandmegsblog
Wilson discusses the importance of organization and composition of art. He believes a nontraditional way of displaying artwork is artwork itself. Lighting, composition, and structure play a key role in how the piece is understood. Wilson received the MacArthur Foundation Genius Grant in 1999 and the Larry Aldrich Foundation Award in 2003. Fred was also lucky enough to represent the United States. His conceptual art voices his opinions about how people fit together within the world despite color and shape. All of his work has a sadness to it that represents the oppression of many different people. Drip Drop Plop is one of my of my favorite pieces by him because it not only represents a very important subject, but also because its dark glassy look is easy to relate to. The thick tar like black along with the cartoony eyes represents the historical and social issues that Wilson chooses to talk about.