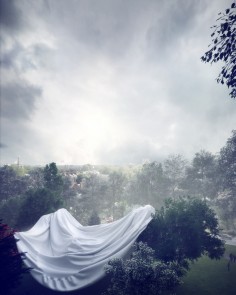 The light, unbound structure of the deflating pavilion, revolving around the theme “dream” was proposed as a temporary pavilion that subtlety drapes over and encompass the Museum Garden in London. The design creates an inflated, altered reality within the existing landscape.

It does not poses any static qualities but rather intrigues us with its dynamism, places a guise over the physical landscape and resting upon near by trees. It adds a new characteristic to the environment and briefly transforms it similarly as one briefly submerges into a dream from reality. The structure combines realism with surreal and analyzes both at the same time in juxtaposition with one another. It creates an obstacle for light, where shadows are casted and colors are merged.

The structure is a constant metamorphic state as it deflates and inflates. Its materiality works along side with natural aspect of the wind and light to evokes a new perception in our spatial time frame. It causes one to feel that their always in a different place by rejuvenates their senses with its varying forms.

It creates a new type of interaction between people and space one which is responsive and satisfies our on-going curiosity. It not only employs the environment but also our senses, and should not be looked upon as a structure within a site, but rather a structure that becomes the site, presenting a new understanding about our perspectives of reality.
.
.
.
.
.
.
.
source: designboom

in response to the theme, ‘dream’ for an ephemeral pavilion, ‘aground’ is an air balloon structure that descends over the museum gardens in the heart of london. the envelope moves awkwardly in the site, following the wind it investigates the edge of the clearing and sets over the trees. changing the landscape, the new volume sets in, assimilating with elements already present. reflections appear, as the light is deviated and new colors and shadows arise.

throughout the duration of the exhibition, the environment is in constant renewal. the construction follows a similar process of a hot-air air balloon. its envelope could be made of light-weight and strong synthetic fabrics such as ripstop, nylon or dacron.

surrounded by a veil, the ephemeral pavilion offers a space that alters one’s perception, evoking the feeling of being somewhere else all together. like a fog, the haze manipulates people’s view of the park as it loses its accuracy. silhouettes are blurred. people, objects, shapes and colors blend together – like a dream visual understandings are challenged. certainties fade and imagination is provoked during this interpretation process. the place is still the same, but a simple veil filled with air leads to a new understanding of it.