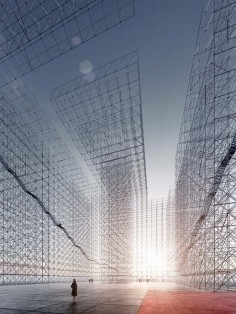 Imagined by architect Guillaume Mazars, “Reveal the absence, the Un-Built” is an architectural project of orthogonal grids shaped like a cube. Inspired by the work of Russian artist El Lissitzky – “The Wolkenbügel”, this structure plays on transparency, depth, concepts of space and perception. At night, the virtual contours will be enlightened in order to guess the building in the dark.
.
.
.
.
.
.
.
source: designboom

the proposal to establish a monument echoing the various works of el lissitzky reveals a the notion of space and depth within three-dimensional structures. the system highlights emptiness, depth, projections – disclosing its physical absence.
the project consists of a 3D orthogonal grid conforming to the size of wolkenbrugel. by subtracting, in the manner of molding, a reconstruction of the spatial presence manifests as an imaginary structure -which remains invisible but perceptible.
from this imprint, the imagination of the visitor completes the virtual projection of the monument. at night, a light network reveals the virtual contours of the form -where bright spots distributed throughout the structure act as dynamic support for
interventions of invited artists.
.
.
.
.
.
.
.
source: gizmodo

Some of the most important buildings of our time exist only on paper—and we’re left to reconstruct them, over and over, in our imaginations. But that doesn’t mean we can’t experience these lost structures through other means.

To honor El Lissitzky—the famously unbuilt German architect who inspired a generation of avant-garde designers in the 1920s—an architect named Guillaume Mazars has proposed a simple solution. First, build a framework of scaffolding. Then, rig the structure with programmable LEDs. Finally, use these lights to, in effect, create a giant, 3-dimensional TV set in the sky—upon which Mazars would recreate El Lissitzky’s eternally unrealized “horizontal skyscrapers,” also known as Wolkenbügel, or “cloud-irons”.
.
.
.
.
.
.
.
source: archinect

The proposal is to establish a monument echoing the various works of El Lissitzky. The aim is to make perceptible the notion of space and depth with a three-dimensional structure. This system will be the tool to reveal emptiness, depth, projections…
At first, this system offers to reveal the absence, or in other words the un-built. The wolkenbrugel is one of the most famous projects of El Lissitzky, but unfortunately without physical manifestation. The project consists of a three-dimensional orthogonal grid conform of the size of wolkenbrugel. Then, by subtracting, in the manner of molding, we will reconstruct the spatial presence of El Lissitzky project without physically reconstruct itself, the imaginary project remains invisible but perceptible. From this imprint, it is the imagination of the visitor who completes the virtual projection of the monument.
At night, a light network reveals the virtual contours of the Wolkenbrugel. The bright spots distributed throughout the structure are also a dynamic support for interventions of invited artists.
In a second step the frame is a structural support for the staging of graphic lines. Various structural elements painted red, a color most used by El Lissitzky, creates a unique graphic composition according to each viewpoint. These red lines placed in space together, form various graphic compositions. By displacement, the visitor built and deconstructed these compositions and appears depths. These red lines define the space.