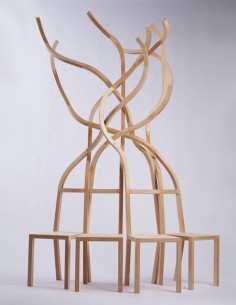 Designed by Rob Southcott, United We Stand is a powerful metaphor for the support networks formed in daily human relations. Made of birch ply with brass hardware, the four chairs of United We Stand draw support from their neighbouring structures representing the value of community.
.
.
.
.
.
.
.
source: ideacious

Similar to trees whose roots interconnect underground to support each other in fierce weather, the United We Stand Chair is designed so that each chair draws support from neighbouring chairs. Together, they work to create an impossibly structured structure.

Rob Southcott is one of the most exhibited industrial designers working today. Chances are you’ve seen his Mustash end tables or Totem Cups. With a portfolio that covers lighting, furniture, and product, his designs are whimsical, clever and often beautiful. Southcott has won a number of awards and is currently among the designers featured in “Bent Out of Shape,” an exhibition at the Design Exchange in Canada, which focuses on Canadian designers from 1945 to the present.
.
.
.
.
.
.
.
source: iidexcanada

As an artist and designer Southcott is driven by a creative sensitivity for observation and synthesis. Creating objects and art pieces that address the potential of form and function as a relational aesthetic exchange. His work draws from the realm of the experiential and the lived. As a creative maker, he finds inspiration in every facet of the material world and his process-oriented practice summons metaphor and considers the inherent lives of materials