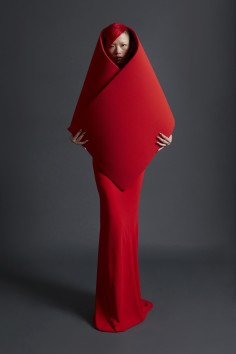 source: showstudio
This season, in a move that is becoming synonymous with the Gareth Pugh brand, the London-based designer invited his audience to the BFI IMAX for an exclusive screening of this fashion film, edited by Art Director Younji Ku, in lieu of the traditional catwalk show.

Nick Knight and Gareth Pugh continue their longstanding friendship with a film that expresses the intensities of Pugh’s collection for S/S 18, as conceptualised by Knight, Pugh and Carson McColl. French philosophical artist Olivier de Sagazan interacts with Pugh on both a physical and cerebral plane, pushing the boundaries of fashion imagery in their collaborative work with clay, water and paint.

Katie Shillingford styles looks from Gareth Pugh’s S/S 18 collection against a set by Andy Tomlinson. A sea of bodies choreographed by Wayne McGregor surge together whilst Tessa Kuragi is encased in gold foil.
.
.
.
.
.
.
.
source: youtube
‘This is not a show.’ Nick Knight and Gareth Pugh offer an exclusive visual insight into Pugh’s S/S 18 collection presented here as fashion film. In collaboration with philosophical artist Olivier de Sagazan, Pugh explores the extremities offered by the elements and the raw physicality of humanity.