Positions of the Unknown 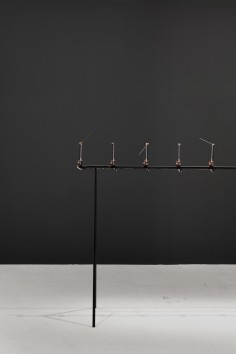 source: vimeo
At the very beginning of space exploration the infrastructure to monitor the whole sky was not yet developed. So in order to find out whether foreign countries launched objects, the US government started to train citizens to observe and detect possible artificial satellites. Scattered over the allied world, these amateur scientists played a crucial part in keeping track of all men-made technology orbiting earth, until “Operation Moonwatch” was discontinued in 1975.

But existing knowledge and passion did not disappear together with the public mandate and the participating civilians found another sphere of interest: discovering and exposing those objects, whose existence is denied by official sources.

Until today a devoted group of amateur astronomers runs an alternative catalogue, containing about 450 datasets missing in the officially published lists. Most of these classified objects are still defined though and their true nature is known. But for currently 52 objects no specifications are available. Only their locations can be calculated.

“Positions of the Unknown” locates the current whereabouts of these mysterious objects by simply pointing at them as they revolve around Earth. Missing the legal proof, those unidentified artefacts remain entities of pure speculation, secret companions of us and our planet. Even so they have been sighted several times and their ubiquitous presence is therefore somehow validated, they linger in a state between existence and non-existence. Quadrature’s 52 small machines constantly follow their paths and serve as silent witnesses of the unknown.