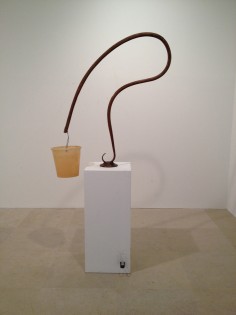 Gelitin is comprised of four artists.
They met first in 1978 when they all attended a summer camp.
Since then they are playing and working together.
1993 they began exhibiting internationally.
.
.
.
.
.
.
.
source: artinamericamagazine

The Viennese all-male collective Gelitin (Ali Janka, Florian Reither, Tobias Urban and Wolfgang Gantner) are self-styled provocateurs, whose performances, installations and other artworks jubilantly valorize in-your-face nudity (their own), gender bending, scatology and phallic and anal imagery. While such artistic antics resonate with those of Günter Brus, Otto Mühl, Hermann Nitsch and Rudolf Schwarzkogler, Gelitin foregoes the violent masochism, gore and political overtones of Viennese Actionism, championing instead humor, boyish naivete and fun for fun’s sake. Gelitin’s naughty escapades have included contorting their bare bodies on a table with buttocks splayed in the air and plugged with lit candles to form a human birthday cake; constructing a wooden outhouse at the Kunsthaus in Bregenz, Austria, inside which visitors could view themselves defecating over a Turkish toilet via mirror reflections; and sculpting a fountain in the form of a giant male nude doing a backbend and urinating into his own mouth. More recently, they staged Some Like It Hot! during the first week of the 2011 Venice Biennale. Erecting a wood-burning furnace in a garden of the Arsenale, Gelitin melted shards of glass and discarded the molten liquid onto the ground. Their futile gesture and the accumulated waste from the kiln, a kind of excretory organ in their overactive Freudian imaginations, were a cheeky send-up of the creative process.

The 12 paintings and 11 photocollages (all 2012) in Gelitin’s recent solo exhibition illustrate their enduring belief in the power of artistic levity to transgress social taboos. With impish titles like Shit Is Me and End of Fuck/Familial/Fake, the paintings consist of colorful blobs of Plasticine (the group’s preferred medium) on particleboard; each painting is accented with a single human eye (made of plastic or Plasticine) and framed using scavenged pieces of wooden chairs. These kitschy abstract lampoons of Surrealism echo Gelitin’s spoofs on the Mona Lisa (2007–10).

Even if Gelitin occasionally tries too hard to offend and its artistic vocabulary sometimes seems hackneyed, the group has a knack for eliciting smiles and hoots. These four zany friends are most talented as performers, daring to do in public what most would not even venture in private.