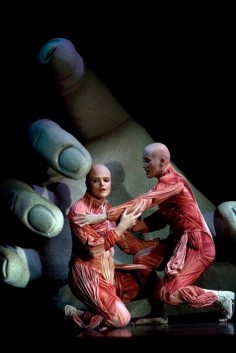 Ligeti was born in Târnava-Sânmărtin (in Hungarian, Dicsőszentmárton, renamed Târnăveni in 1945), in the Transylvania region of Romania to a Hungarian Jewish family. Ligeti recalls that his first exposure to languages other than Hungarian came one day while listening to a conversation among the Romanian-speaking town police. Before that he hadn’t known that other languages existed. He moved to Cluj (Kolozsvár) with his family when he was 6 and he was not to return to the town of his birth until the 1990s.

Ligeti received his initial musical training in the conservatory at Cluj. In 1943, after the takeover of Northern Transylvania by Hungary following the Second Vienna Award, his education was interrupted when, as a Jew, he was sent to a forced labor brigade by the Horthy regime. His brother, at the age of sixteen, was deported to the Mauthausen concentration camp; his parents were both sent to Auschwitz. His mother was the only other survivor of the immediate family.

Following the war, Ligeti returned to his studies in Budapest, Hungary, graduating in 1949 from the Franz Liszt Academy of Music. He studied under Pál Kadosa, Ferenc Farkas, Zoltán Kodály and Sándor Veress. He went on to do ethnomusicological work on Romanian folk music, but after a year returned to his old school in Budapest, this time as a teacher of harmony, counterpoint and musical analysis. However, communications between Hungary and the West by then had been undergoing difficulties due to the communist government, and Ligeti and other artists were effectively cut off from the recent developments outside the Soviet bloc. In December 1956, two months after the Hungarian revolution was put down by the Soviet Army, he fled first to Vienna and eventually took Austrian citizenship.

In Cologne he was able to meet several key avant-garde figures and to learn the more contemporary musical styles and methods. These included the composers Karlheinz Stockhausen and Gottfried Michael Koenig, both then working on groundbreaking electronic music. Ligeti worked in the same Cologne studio, and was inspired by the sounds he heard there. However, he produced little electronic music of his own, instead concentrating on instrumental works which often contain electronic-sounding textures.

From this time, Ligeti’s work became better known and respected, and his best known work might be said[weasel words] to span the period from Apparitions (1958–59) to Lontano (1967), although his later opera, Le Grand Macabre (1978) is also fairly well-known. In more recent years, his three books of Études for piano have become better known thanks to recordings made by Pierre-Laurent Aimard, Fredrik Ullén, and others.

Ligeti took a teaching post at the Hamburg Hochschule für Musik und Theater in 1973, retiring in 1989. In the early 1980s, he tried to find a new stylistic position (closer to “tonality”), leading to an absence from the musical scene for several years until he reappeared with the Trio for Violin, Horn and Piano (1982). From then on, his output was plentiful through the 1980s and 1990s. Invited by Walter Fink, he was the first composer featured in the annual Komponistenporträt of the Rheingau Musik Festival in 1990.

However, health problems became severe after the turn of the millennium, and no further vocal pieces appeared after the song cycle Síppal, dobbal, nádihegedüvel (“With Pipes, Drums, Fiddles”, 2000). Ligeti’s last original work to be completed is the eighteenth piano etude of 2001, “Canon.” This title and the form of the etude recall the musical language of Ligeti’s central European homeland.

Ligeti died in Vienna on June 12, 2006 at the age of 83. Although it was known that Ligeti had been ill for several years and had used a wheelchair the last three years of his life, his family declined to release the cause of his death. Ligeti’s funeral was held at the Vienna Crematorium at the Zentralfriedhof, the Republic of Austria and the Republic of Hungary represented by their respective cultural affairs ministers. The ashes were finally buried at the Zentralfriedhof in a grave dedicated to him by the City of Vienna.

Aside from his musical interests, Ligeti was interested in literature, for example in Lewis Carroll, and the arts, in architecture, in science and mathematics, especially in the fractal geometry of Benoît Mandelbrot, and in Douglas Hofstadter.

Ligeti was the grand-nephew of the great violinist Leopold Auer. Ligeti’s son, Lukas Ligeti, is a composer and percussionist based in New York City.

Ligeti’s earliest works are an extension of the musical language of Béla Bartók. Even his piano cycle, Musica ricercata, though written according to Ligeti with a “Cartesian” approach in which he “regarded all the music I knew and loved as being…irrelevant”,[8] has been described by one biographer as inhabiting a world very close to Bartók’s set of piano works, Mikrokosmos. Ligeti’s set comprises eleven pieces in all. The first uses almost exclusively just one pitch A, heard in multiple octaves. Only at the very end of the piece is a second note, D, heard. The second piece then uses three notes (E♯, F♯, and G), the third piece uses four, and so on, so that in the eleventh piece all twelve notes of the chromatic scale are present.

Already at this early stage in his career, Ligeti was affected by the communist regime in Hungary at that time. The tenth piece of Musica ricercata was banned by the authorities on account of it being “decadent.” Given the far more radical direction that Ligeti was looking to take his music in, it is hardly surprising that he felt the need to leave Hungary.[original research?]

Upon arriving in Cologne, he began to write electronic music alongside Karlheinz Stockhausen and Gottfried Michael Koenig at the electronic studio of West German Radio (WDR). He completed only two works in this medium, however, including Glissandi (1957) and Artikulation (1958), before returning to instrumental music. A third work, originally entitled Atmosphères but later known as Pièce électronique Nr. 3, was planned; however, the technical limitations of the time prevented Ligeti from realizing it completely. It was finally realized in 1996 by the Dutch composers Kees Tazelaar and Johan van Kreij of the Institute of Sonology.

Ligeti’s music appears to have been subsequently influenced by his electronic experiments, and many of the sounds he created resembled electronic textures. Apparitions (1958–59) was the first work that brought him to critical attention, but it is his next work, Atmosphères, that is better known today.

Atmosphères (1961) is written for large orchestra and is not musically related to the earlier electronic piece of the same name, although some of its aesthetic intentions are similar. It is seen[who?] as a key piece in Ligeti’s output, laying out many of the concerns he would explore through the 1960s. Out of the four elements of music — melody, harmony, rhythm and timbre — the piece almost completely abandons the first three, concentrating on the texture of the sound, a technique known as sound mass. It opens with what must be one of the largest cluster chords ever written — every note in the chromatic scale over a range of five octaves is played at once. Out of the fifty-six string players ushering in the first chord, no two play the same note. The piece seems to grow out of this initial massive, but very quiet, chord, with the textures always changing. For this compositional technique not only used in the aforementioned work, Atmosphères, but also in Apparitions and his other works of the time, Ligeti coined the term “micropolyphony”.[citation needed]

The Requiem for soprano, mezzo-soprano, five-voice chorus, and orchestra is a four-movement work in the same totally chromatic style as Atmosphères. It is a massive, twenty-part choral quasi-fugue where the counterpoint is rethought in terms of the material, consisting of melismatic masses interpenetrating and alternating with complex skipping parts. The last instance of this quoted in the film 2001: A Space Odyssey (at Jupiter: Beyond the Infinite) segues to the opening of Atmosphères. The penultimate movement, “de Die Judicii Sequentia” (Day of Judgement Sequence) is a montage of contrasts: fff loud versus ppp soft, masses of sound versus soloists, etc. In the final movement, “Lacrimosa” (weeping), the chorus is muted, and only a reduced orchestra accompanies the plangent singing of the soloists. Ligeti did confirm that his parents’ experience at Auschwitz is an influence in the piece.[citation needed]

Lux Aeterna is a 16-voice a cappella piece whose text is also associated with the Latin Requiem. The piece is strongly modeled after the masterful mensuration canons of Johannes Ockeghem and accomplishes much the same effect, but with secundal, rather than tertian harmony, in a paradoxically thick-but-transparent 16-voice texture.

From the 1970s, Ligeti turned away from total chromaticism and began to concentrate on rhythm. Pieces such as Continuum (1968) and Clocks and Clouds (1972–73) were written before he heard the music of Steve Reich and Terry Riley in 1972, yet the second of his Three Pieces for Two Pianos, “Self-portrait with Reich and Riley (and Chopin in the background),” commemorates this affirmation and influence. He also became interested in the rhythmic aspects of African music, specifically that of the Pygmies.

In the mid-70s, Ligeti wrote his only opera, Le Grand Macabre, loosely based on the 1934 play, La Balade du grand macabre, by Michel De Ghelderode. It is a work of absurd theatre that contains many eschatological references.

His music of the 1980s and 1990s continued to emphasize complex mechanical rhythms, often in a less densely chromatic idiom (tending to favor displaced major and minor triads and polymodal structures). Particularly significant is the Piano Concerto (1985–88), which Ligeti described as a statement of his “aesthetic credo”. Also important are his Études pour piano (Book I, 1985; Book II, 1988–94; Book III, 1995–2001), which draw from such diverse sources as gamelan, one of his favorite jazz pianists, Thelonious Monk,[unreliable source?] African polyrhythms, Bartók, Conlon Nancarrow, and Bill Evans; Book I was notably written as preparation for the Piano Concerto, which contains a number of similar motivic and melodic elements. Other notable works in this vein include the Horn Trio (1982), the Violin Concerto (1992), and the a cappella Nonsense Madrigals (1993), one of which sets the text of the alphabet.

Ligeti’s music is best-known to the general public for its use in the films of Stanley Kubrick. The soundtrack to 2001: A Space Odyssey includes four of his pieces: Atmosphères, Lux Aeterna (for the moon-bus scene en route to the TMA-1 monolith in the crater Tycho), Requiem (the Kyrie section), and an electronically altered version of Aventures (in the cryptic final scenes). Some of this music was used again in Peter Hyams’s 1984 sequel film, 2010. Kubrick’s The Shining uses Lontano for orchestra. The second of Ligeti’s Musica ricercata is used extensively in Eyes Wide Shut.

Lontano, Melodien, and Volumina were used in the first radio series of The Hitchhiker’s Guide to the Galaxy as background music to the sections of narrative from the Guide.
.
.
.
.
.
.
.
.
source: gitelalanternecanalblog