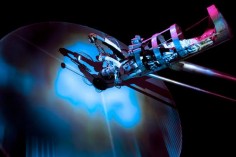 Over the course of his prominent career, the German composer Karlheinz Stockhausen took on myriad guises. To the European postwar establishment, he was an enfant terrible, embracing the objective rigor of total serialism and the uncharted vistas of electronic music and happenings. For adventurous jazz and rock musicians like Miles Davis, the Beatles and Frank Zappa, he was a
From the ’80s onward, as Stockhausen obsessively devoted his time and labor to the seven-day opera cycle “Licht” (“Light”) and the 24-part series “Klang” (“Sound”), he was a mystic and a narcissist, making eccentric, unrealistic demands — a string quartet for players aloft in four separate helicopters, for example. That he might have lost his grip on reality altogether seemed possible when, in 2001, he referred to the Sept. 11 attacks as “the greatest work of art that is possible in the whole cosmos” — a statement taken out of context, he strenuously insisted.

Now, just over five years after his death — and with an acclaimed staging of “Michaels Reise um die Erde” (“Michael’s Journey Around the World”), the second act of the opera “Donnerstag aus Licht” (“Thursday From Light”), opening at the Lincoln Center Festival on Thursday — Stockhausen appears to have assumed his least-likely status of all: surefire box-office hit.

“He was always the one composer who was the icon of contemporary music,” said Thomas Oesterdiekhoff, the chief executive director of Ensemble musikFabrik, the German new-music group that is mounting “Michaels Reise um die Erde” in its North American premiere.

Contemporary music has become a standard part of normal concert life, he asserted, so audiences naturally are drawn to Stockhausen. “If they want to know something new, they can get it now through Stockhausen,” he said.

Certainly, nothing fundamental has changed about compositions like “Gruppen,” the complex work for three orchestras mounted by the New York Philharmonic and the Park Avenue Armory in 2012, or the electronic piece “Oktophonie,” a segment of “Dienstag aus Licht” (“Tuesday From Light”), presented by the Armory in March. But the Philharmonic concerts sold out, and the Armory had to add extra performances of “Oktophonie” to satisfy the demand for tickets.

Even before those large-scale, attention-grabbing productions, a Stockhausen boomlet was under way in New York. “Stimmung,” a 1968 vocal work, mesmerized an audience at 5:30 a.m. during the 2008 Bang on a Can Marathon, held just yards away from ground zero. And the grass-roots concert organizers of Darmstadt: Classics of the Avant-Garde attracted capacity audiences to the Issue Project Room in Brooklyn with seminal older works like “Gesang der Jünglinge” and “Kontakte” in 2010, and with the New York premiere of “Cosmic Pulses” (from “Klang”) in 2011.

The phenomenon is not limited to New York. A 2012 Birmingham Opera Company production of the opera “Mittwoch aus Licht” (“Wednesday From Light”), including the notorious “Helicopter String Quartet,” earned a prestigious award from the Royal Philharmonic Society. At the same time, musikFabrik has successfully mounted “Michaels Reise” in Vienna, Cologne, Dresden, Warsaw, Venice and Paris.

Speaking by telephone from Cologne, where musikFabrik was presenting Stockhausen’s “Samstag aus Licht” (“Saturday From Light”) with the Bavarian Radio Symphony Orchestra, Mr. Oesterdiekhoff said that the composer’s death emboldened some institutions previously reluctant to take on his works. “When he was alive, to be honest, he was quite demanding,” he said. “There were a lot of presenters who were really afraid of Stockhausen, because, they said, when we want to do something by Stockhausen, it will cost a fortune, and that will be our ruin.”

Ensembles and institutions are willing to offer interpretations that might deviate from the composer’s explicit intentions, Mr. Oesterdiekhoff said, adding, “Now, people are more free to do it in the way they think it should be done.” After musikFabrik introduced an elaborate, appealing staging of “Michaels Reise” — produced by the Vienna Taschenoper and directed by Carlus Padrissa of the innovative Catalan street-theater company La Fura dels Baus, in 2008 — the group went on to mount the first complete traversal of “Klang” in 2010, then joined Opera Cologne in the world premiere of “Sonntag aus Licht” (“Sunday From Light”) in 2011.

“After that, everything is now workable, everything is possible and accessible,” Mr. Oesterdiekhoff said. He added that while the two musicians who manage Stockhausen’s legacy, Kathinka Pasveer and Suzanne Stephens, don’t agree with every interpretive departure, they have eagerly cooperated in the promulgation of his works and even performed with musikFabrik in some instances.

Of course, accessible is a relative term when it comes to Stockhausen, in whose operas sacred, mundane, autobiographical and absurd elements collide. The wholly instrumental “Michaels Reise” concerns a voyage of discovery undertaken by the angel Michael, one of three characters featured throughout “Licht.” The others are the rebel angel Lucifer and the earth mother Eve. All come from “The Urantia Book,” a volume of quasi-Christian mysticism that Stockhausen said he bought from a mysterious stranger after the composer conducted the New York Philharmonic at Avery Fisher Hall in 1971.

Effectively a staged concerto in which the trumpeter Marco Blaauw portrays Michael while suspended from a crane onstage, “Michaels Reise” is saturated with mystery, whimsy, eros and spirituality: elements echoed in Mr. Padrissa’s imaginative stage conception. The Lincoln Center Festival director Nigel Redden, who was inspired to bring the work to New York after seeing musikFabrik’s collaboration with Mr. Padrissa in “Sonntag aus Licht” in Cologne, said that a mix of spirituality and absurdity is a key aspect of Stockhausen’s work.

“There’s almost a ridiculous aspect to some of the requirements, and somehow that is also part of what makes these performances extremely strong,” Mr. Redden said. “They could become pretentious if they didn’t have this element of the absurd.” Inviting audience members to embrace Stockhausen’s conceits, he said, Lincoln Center is encouraging those attending “Michaels Reise” to wear bright blue, designated by the composer as the “exoteric” color of “Donnerstag aus Licht.”

In a sense, such notions seem to bring audience members closer to Stockhausen’s work rather than alienating them. For “Oktophonie” at the Armory, all who attended were offered white robes to wear as they reclined on a circular carpet meant to suggest a lunar surface. “I think it’s finding the strings, the pieces that make it relate to people, that works,” said Rebecca Robertson, the Armory’s president and executive producer. “There is something about Stockhausen’s music that fit well with that sense of ritual, that sense of being in a community, being in that sort of sonic box together. So I think maybe those things move that experience along, and people really like that.”

For Nick Hallett and Zach Layton, the composers and performers who operate Darmstadt: Classics of the Avant-Garde, spectacle has played a lesser role — though not for lack of ambition. Mr. Hallett said that he and Mr. Layton had tried to coordinate a performance of “Helicopter String Quartet” for Make Music New York recently but could not secure the necessary permits. Undaunted, they are planning a 50th-anniversary resurrection of another major Stockhausen work, “Originale,” for 2014.

“New York loves spectacle, and I think that that’s what makes these works so exciting, that they offer this spectacle,” he said. “That’s not ultimately what I think makes Stockhausen’s music so compelling. I think he was obviously a unique composer with a unique approach, and a sound that no one could really touch on.”

Mr. Layton speculated that Stockhausen’s early electronic innovations could account for broadening interest among younger listeners. “Stockhausen’s work in the ’60s, when he was working at the radio studios in Cologne, involved a new investigation into electronic music,” he said. “There was something about his investment with oscillations and broadcast, and the idea of electromagnetic radiation, that got him interested in thinking about kinds of cosmic radiation. These old broadcasts are still emanating into outer space, and those radio waves are just going to go on infinitely.”

Those interests, Mr. Layton said, predicted a fascination with cosmic vibrations and resonant frequencies among early New Age performers of the 1970s who are now enjoying an unexpected resurgence among a new generation, “people who have come up listening to music on blogs and file-trading and cassette-tape culture.”

“There is definitely a sort of wink and a nod: Yes, we acknowledge that this stuff is maybe a little cheesy, but, actually, there is something to it,” Mr. Layton explained. “And I think that Stockhausen in some ways was one of the first people in the European avant-garde, the postwar serial heavyweights, that also took it seriously.”
.
.
.
.
.
.
.
source: elpais