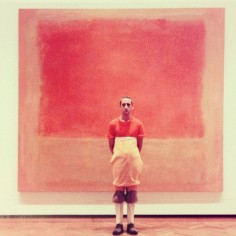 My multi-disciplinary practice is propelled by the desire to challenge and illuminate the complex action – and boundless subject – of perception. I continually create open arenas and experiences for an audience to engage with both the apparent and the covert frameworks that guide the ways in which we see, act, and comprehend the world around us. More specifically, the work questions the contexts of art (from the personal to the institutional) and investigates how these can reveal and/or obscure the meaning of the artworks themselves.

To stimulate a dimensional comprehension of perception, formal visual strategies are employed that deal in the poetic manipulation of familiar materials and messages. Camouflage, repetition and realignment, magic, smokescreens, as well as visual puns and social games are but a few of the tactics that blur the hard facts of our assumed reality, and puncture any illusions of neutrality inherent in an art context. The work also activates the idea of the “double-take,” generating a snap realization in the viewer of a deeper and richer presence than what was initially seen. For example, the Museum Camouflage series (1998-2001) took up a discourse around painting and its displays by displacing two- and three-dimensional space using trompe l’oeil as a performative intervention, underscoring the belief that vision is also a visceral experience. To that end, the work also implicates the bodies of the artist and of the audience, which even if absent or invisible are absolutely required for both the production and experience of art.

The art museum has served as a key site for these questions and explorations; like many artists, I believe deeply in museums as educational forces, as wellsprings for visual fluency, and as welcome respites from the passive viewership offered by our oversaturated media culture. Yet working as a preparator at museums and galleries has infused the work with a more intimate perspective on this particular context for art, shifting its focus to the act of perception not only as action, but also as metaphor. Specifically, it queries the institution’s public claims of autonomy and objectivity, and illuminates the lack of transparency when it comes to the other forces that shape the definition and display of art: money, immaterial labor – the unseen hands responsible for art’s appearance – as well as the politics that too often determine what audiences see, and what they don’t. My practice takes on this lack of neutrality – the whitewashing (literally and figuratively) of the museum’s walls – to create a dissonance in the dictated art-going experience, and ultimately to reawaken the audience to their own powers of observation. In the end, the work is intended to function as a portal – a playful looking glass – through which we might see more clearly our lack of attentiveness to daily life. As I refine and expand my practice, it is my hope that the work will continue not only to activate but also one day to produce spaces and contexts where art, and the experience of art, can more powerfully and provocatively exist.
.
.
.
.
.
.
.
source: mke-lax

Harvey Opgenorth has exhibited at the Bodybuilder and Sportsman Gallery, Renaissance Society, and Bettey Reimer Gallery at the Art Institute of Chicago, Chicago; Soap Factory, Minneapolis; Adambomb Gallery, Armoury Gallery, Hotcakes Gallery, Milwaukee Institute of Art & Design, Temporary Contemporary Gallery and Milwaukee Art Museum, Milwaukee; Richmond Center for Visual Arts at Western Michigan University, Kalamazoo, Michigan; and La Casa Encendida, Madrid, Spain. From 1999-2004, he collaborated on the collective project, Rust Spot, in Milwaukee and he currently collaborates with the collective, White Box Painters. He received a BFA from the Milwaukee Institute of Art & Design in 1999 and has studied at the (AICAD) New York Studio Residency Program in New York City, hosted by the Parsons The New School for Design.