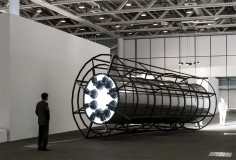 source: initialaccesscouk
Born 1971 Wuhan, China
Lives and works in Beijing, China
He An spent three months in Manchester in 2003 as artist-in-residence at the Chinese Arts Centre. His works reflect the impact of western mainstream culture upon the emergent youth culture in China, and its enthusiasm for contemporary music, fashion, art, and ideas. In major cities all over China, people are feeling the impact of the flourishing economy, the volume of media information, and adjustments in socio-political circumstances. Exposure to Hollywood – for better or worse through the pirating of films made widely available by DVD technology – has opened doors to human experiences that were previously closed.
At the 2006 Shanghai Biennale He An made a work that took the form of a rippling string of neon running around the roof of a building, curving light around fragments of dialogue from two well-known films, The English Patient and Natural Born Killers (the latter which, together with Swordfish and Kill Bill He An describes as the coolest of films).
He An’s 2007 work Matrix develops his interest in mainstream cinema as a sculptural installation based on the 1999 film The Matrix. It portrays a future in which reality as perceived by humans is actually simulated, created by sentient machines in order to pacify and subdue the human population while their bodies’ heat and electrical activity are used as an energy source.
.
.
.
.
.
.
.
source: whiterabbitcollectionorg
“Although my father and I now live in different worlds, I believe this artwork strengthened our relationship in some way.”
Born Wuhan, Hubei, 1971
For He An, neon signs denote more than the names of shops, companies and nightclubs. They also speak of the city and the night, of loneliness, sex and death—and far more loudly than people do. “In the city, what we say in our little apartment is not important,” he declares. “What is important is the words the neon lights project onto us.” Signs are, in the artist’s words, What Makes Me Understand What I Know (2009). Dozens of characters taken from signs—some factory seconds, some stolen to order by friends—spell out, like words in a Chinese version of Scrabble, the names of the artist’s late father and a Japanese soft-porn actress. Each name is written twice, once forward and once backward. Their owners’ relationships to He An have also been reversed. “My father used to live near me, and I could visit him regularly. The Japanese actress seemed far away; I could only see her on the Internet. Now my father has passed out of this world. At least Miho Yoshioka and I live in the same world and there is a chance I might see her one day.” Through their names alone, two total strangers become signs of grief and eros, brought together by the only person on earth who loved them both.