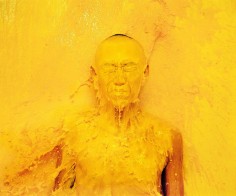 Lee Wen, a multidisciplinary artist and one of Singapore’s most internationally recognised contemporary artists. His earliest known work in a book entitled A Waking Dream (1981) with texts and drawings preceded the manga generation of today and showed evidence of his inclination in using dreams, metaphor and myth-making to manifest a narrative of our perception of life and reality.

Best known for his Yellow Man series of work, Lee is also one of the Singapore artists who pioneered in the field of performance art. Through various constructed personas, his work allow visitors an insight into the artist and provocateur, whose very being is motivated by a strong conviction of justice and idealism, with a persistence to stay true to the self in a highly structured world.
.
.
.
.
.
.
.
source: cosmone

As a multidisciplinary artist, Lee is recognised for delivering layered and complex works that deal with issues of society, politics, culture, and identity. His personal responses to challenging experiences as an individual in society are meant to provoke and invite audiences to reconsider their roles in society, just as he does. A pioneer and champion of Singapore performance art scene, Lee is best known for his Yellow Man series, where his body is covered in bright yellow pigment to express his ethnic identity in a striking manner.
.
.
.
.
.
.
.
source: highlike
Janneke van Leeuwen grew up in the Netherlands, where she obtained a Masters degree in Clinical Neuropsychology at the VU University (2003) and a Bachelors degree in Fine Art Photography at the Gerrit Rietveld Academie (2009) in Amsterdam. Since 2011 she lives and works in London. Janneke van Leeuwen’s photographic work has been extensively exhibited internationally, including solo exhibitions in London and Spain, as well as group shows in art galleries throughout Europe, America, China and Russia. Janneke van Leeuwen’s work has been published in Wallpaper Magazine in London, Aperture Foundation in New York, Art Basel Miami. She’s currently collaborating with two neuroscientists on a book publication about ‘Machine Medical Ethics’, which is due to be published by Springer Science, New York, in April 2014.
Mind Models: Picturing the Human Mind When I was 8 years old I thought that people with brown eyes had a darker view on the world and whenever I put sunglasses on I would say to myself: ‘This must be how you see the world when you have brown eyes’. My early awareness of the differences between people, and our limited access to each other’s experiences, first led me through a Masters’ degree in Clinical Neuropsychology and later brought me to my current career a visual artist. Neuropsychology attracted me most because of its premise that despite all the apparent differences between people, we can find a common ground by studying their mental processes. Neuroscience has already thought us so much about the functioning of the human brain that we are able to translate this knowledge into more and more sophisticated computational models, externalising mental processes previously thought to be inaccessible to anyone but the person experiencing them. Does this mean that human beings are nothing but very complex machines, that could be represented or even replaced by equally or superiorly complex machines? Technological developments certainly seem to suggest so, but a profoundly influencing event in my life has made me think otherwise. Whilst I had just started my university study, my mother began to develop Alzheimer’s disease at the early age of 53. Although I could describe the neuropsychological processes that were causing the degeneration of my mother’s brain, I could not come anywhere near to comprehending her personal experience of slowly loosing more and more the grip on her life. It was then that I realised that the subjective experience of mental processes could never be adequately described in scientific terms. Sentience is the language of art; it does not have a logical structure and is unique to everyone. It touches upon the core of what makes us human beings, yet it seems impossible to fully grasp its nature. To me, photography is the most suitable medium to address this issue with as it has a great similarity to the human mind. Both are generated by a physical body, which processes sensory information according to scientific laws. Yet no photograph or mind is experienced the same by anyone. The essence of a photograph is as elusive as the essence of consciousness. In my photographic series I reflect on this elusiveness by constructing scale models of psychological states. Grounded in the physical world, but lacking an everyday context, these abstract mind models of internal worlds can only be understood intuitively and allow for many possible interpretations. Janneke van Leeuwen.
Photographer: Janneke van Leeuwen
.
.
.
.
.
.
.
source: beerscontemporary
JANNEKE VAN LEEUWEN (b.1980, The Netherlands), obtained a Master degree in Neuropsychology before she went to the Gerrit Rietveld Academie in Amsterdam where she specialized in Fine Art Photography. Directly after graduating from the Rietveld Academie in 2009 her work was selected by the prestigious Musée de l’Elysée in Lausanne, Switzerland for the traveling world exhibition ‘reGeneration2: Tomorrow’s Photographers Today’. Van Leeuwens photography has since then been exhibited internationally, amongst others at the Azzedine Alaïa Gallery in Paris, the JustMadrid Artfair 2012, in Madrid, Spain, The Aperture Foundation in New York, the Art Basel Miami Beach, United States and the Pingyao International Photography Festival in China. In March 2011 she had her first solo exhibition at the AJG Gallery in Seville, Spain. In September 2012 she was a selected artist to exhibit in Amsterdam during the first European Conference on ‘Visual Thinking Strategies’, which was developed by Philip Yenawee, the former director of education of the MOMA New York, United States. Since 2011 Janneke van Leeuwen lives and works in London where she is a resident at V22 Artist Studios in Bermondsey. Van Leeuwen’s exhibition proposal ‘Golden Cages’ for the launch of Art:I:Curate has been recently been selected for exhibition at Gallery 8 on Duke Street, London from the 24th till the 27th of January 2013.