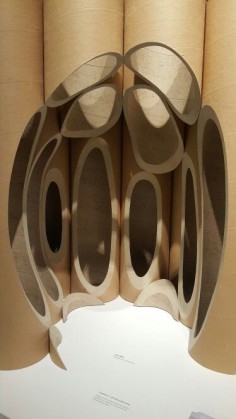 source: heatherwick
The brief was to reinvent the historic Grain Silo at the V&A Waterfront in Cape Town, as a not-for-profit cultural institution housing the most significant collection of contemporary art from Africa and its diaspora.

Our first thoughts wrestled with the extraordinary physical facts of the building. There is no large open space within the densely packed tubes and it is not possible to experience these volumes from inside. Rather than strip out the evidence of the building’s industrial heritage, we wanted to find a way to celebrate it. We could either fight a building made of concrete tubes or enjoy its tube-iness.

Unlike many conversions of historic buildings which have grand spaces ready to be repurposed, this building has none. The project became about imagining an interior carved from within an infrastructural object.

The solution we developed was to carve galleries and a central circulation space from the silos’ cellular concrete structure, creating a cathedral-like central atrium filled with light from a glass roof.

The other silo bins will be carved away above ground level to create gallery spaces for the Zeitz MOCAA permanent collection and international travelling exhibitions.

From the outside, the greatest visible change to the Silo’s monumental structure will be the addition of pillowed glazing panels, inserted into the existing geometry of the upper floors, which will bulge outward as if gently inflated. By night, this will transform the building into a glowing lantern or beacon in the harbour.
.
.
.
.
.
.
.
source: whatsonincapetown
V&A Waterfront and Jochen Zeitz have announced a unique partnership to create a major new cultural institution that will focus on collecting, preserving, researching, and exhibiting contemporary art from Africa. An addition to Cape Town’s already prestigious V&AWaterfront, the museum is scheduled to be completed in 2016, at which point it will assume its place as the largest museum of modern art on the continent. In the meantime, the Zeitz MOCCA Pavilian presents changing exhibitions and educational programs that are available throughout the year.
.
.
.
.
.
.
.
source: heatherwick
British designer Thomas Heatherwick founded Heatherwick Studio in 1994 to bring craft, design, architecture and urban planning together in a single workspace.Today a team of 200, including architects, designers and makers, work from a combined studio and workshop in King’s Cross, London.Rather than identifying with any particular style or aesthetic, Heatherwick Studio is best characterized by its working methodology. The studio explores and tests responses to produce a design that fulfils spirit and letter of the brief in an inventive way.This process is independent of scale: from developing a chair or a masterplan, the same system of collaborative inquiry and experimentation is applied.The studio’s completed projects include a number of internationally celebrated buildings, including the award-winning Learning Hub at Singapore’s Nanyang Technological University and the UK Pavilion at the Shanghai World Expo 2010.The studio is currently working on approximately 25 live projects on four continents. In 2017, Zeitz MOCAA, will open in Cape Town, South Africa, a museum that the studio has designed in a disused grain silo.