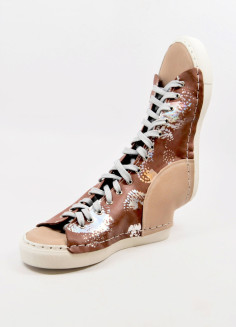 source: conceptkicks
There isn’t much about this entire project I don’t find brilliant. Created during the RISD Industrial Design student, Whitney Bai‘s european excursion earlier this year, this shoe is a phyiscal representaion of the inspiration she ‘horded’ during her time here.

If you frequent this site, you may be used to incredibly clean renderings and intense shoe sketches, and well to be quite honest, this project doesn’t really have either of those things…but what it does have is far more valuable than either of them; a really fkn interesting idea and a well executed final, hand-made sample. Ofcourse, it’s more ‘art’ than functional design, but you never know where this type of disruptive and innovative thinking may lead.

“I was inspired by the simple, classic and yet smart European designs–not trying too hard to be eye-catching, but always make you smile when you discover the surprise, like what I found in Berlin–Bless, or the mind blowing Porcshe Museum, and lots of smart (not the new technology “smart”, just ordinary but extraordinary) houses I saw on the streets. Also, we are giving a pair of cup soles to make only one shoe, which was very confusing at first, but I decided to have some fun with it. What’s a pair of shoes, and what is a shoe. What’s a left and what’s a right…” – Whitney

During her time in Europe, Whitney spent some time taking a shoe design/making course at SLEM and utilized their One Day Sneaker Kit to produce a couple pairs of shoes. The first pair being somewhat of a teaser to the final ‘A (Pair of) Shoe(s)’ concept. Whitney also got a hands-on leather finishing experience at STAHL, where she got to work with “crust” (leather that has been tanned, dyed and dried but not finished), mixing pigment, spray painting, embossing and generally adding interesting final touches to the leather. Whitney created several interesting prints that she ended up using for her final sample, which consisted of arrows and foil, which cleverly tie in with the concept of orientation.

From the initial inspiration, to sketches and a closer look at the final sample, you can get a better understanding of some of the process that went into the creation of this super intriguing concept.
.
.
.
.
.
.
.
source: whitneybai
Originally from Beijing China, trained in the US, Japan and Europe, Whitney received her BFA in Industrial Design with Honors from Rhode Island School of Design.