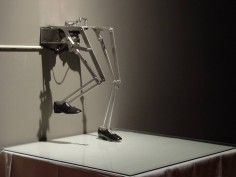 Work: “Protest” is from the project, “Misbehaving: Media Machines Act Out”(2002-2007), a series of mechanical girls’ legs, each with their own prescribed and programmed behavior. In each tableau, an electronically controlled, mechanical being protests with a voice of erratic physical gestures and projected video imagery. As a combination of robotics and performance, they represent girls who disobey or resist expectations. Unlike machines designed for perfect job performance, these machines will declare their fallibility, impatience, approval, and disapproval through small gestural acts. In these tableaus of protest and transformation, the machine is spirited, emotional, thoughtful, and irregular. “Protest” consists of aluminum, mechanized pairs of 6 year-old girl’s legs fitted with shoes and standing on a table top. An electronic circuit and proximity sensors make her responsive to the presence of viewers for whom she stomps loudly and erratically.

“Kumao’s show demands attention first, however, much like the wayward mechanical “girls” that inhabit the three interactive works on display. The child in each piece is represented by a pair of aluminum legs (no head, arms. or upper body) to which girls’ or baby shoes are attached. Movement by gallery visitors activates “Protest,” a piece that features a pair of metal legs clad in black patent leather Mary Janes that juts from the wall and stands on a wood coffee table. When motion is detected, one of the legs moves up and down, stamping the foot as a child would do in a tantrum with loud, unexpected sounds that make the viewer jump…The works in “Misbahaving” are unsettling. The characters in these scenes seem crippled (the metal legs recall the braces used by polio patients in the 1950s), and they are forever at the whim of outside forces they can’t control, although they try mightily to assert their power.” –Gail Philbin, Feb 2008, The Grand Rapids Press, Grand Rapids, Michigan, USA.
Photographer: Heidi Kumao
.
.
.
.
.
.
.
source: heidikumao

Portrait of a Girl: A motorized pair of girl’s legs takes the emotional temperature of the room and makes her presence known through loud (she’s wearing tap shoes) and erratic stomping and tapping on household furniture. Responding to the presence of viewers, this girl alternates between aggressive, attention-getting tantrums and seemingly uncontrolled shaking and jerking.

This piece is one of three sets of girls’ legs that are all part of “Misbehaving: Media Machines Act Out,” a project supported by the Creative Capital Foundation.

“Misbehaving” is a series of three female “performers” for intimate installations. In each tableau, a hybrid machine “being” performs: a kinetic, electronically controlled machine speaks with a visual voice of erratic physical gestures and video imagery. As a combination of performance and robotics, they represent girls and women who disobey or resist expectations. Unlike machines designed for perfect job performance, these machines will declare their fallibility, impatience, approval, and disapproval through small gestural acts and embedded video sequences. In contrast to the precise technique and tireless efforts of a robot that plays chess or constructs automobiles, my robotic performers “act out” and misbehave. In these tableaus of protest and transformation, the machine is spirited, emotional, thoughtful, yet irregular.

Each intimate installation focuses on translating the “unseen” (data from proximity sensors, sound data) into tangible activity such as erratic movement or “incorrect” behavior. Simple mechanized objects frame video imagery of gestures, microscopic activity, and architectural spaces. Like a theater with two stages, each “being” presents a visual conversation between competing equivalents: the machine and its images, the object and its irrational behavior and, ultimately, the “mind” of the performer and her behavior.

Two of the performers are aluminum, mechanized pairs of 6 year-old girl’s legs fitted with shoes and a small screen to receive projected video placed at their torso. An electronic circuit, proximity sensors, and a microphone make them responsive to the presence of viewers. One pair (“Untitled:Resist”) squirms on the floor in a way that reads as both sexualized and fearful as it reveals a narrative on its embedded screen. Another pair (titled “Protest”) will stomp the floor loudly at unpredictable times.

The third piece, “Translator,” is a poetic meditation on the act of translating the language of non-verbal gestures and sounds. A robotic object fitted with a screen moves nervously, back and forth, between two opposing video projectors. Its movement is controlled by the viewer (using a remote control) who must steer the sculpture to each projector to receive its “message.” As the robotic screen nears one projector, it “receives” one set of images and sounds. It then travels across the room to receive a different set of images and sounds. This “go-between” creates a narrative that is made up of broken parts received alternately from each side. Like a child caught between two feuding parents, a political mediator, or a mind which is alternating between two thoughts, the action of the “translator” reveals a story of fragmentation and unification as it reveals and breaks up the narratives received from the two opposing camps.
At the time that I was developing this project, robotic art was becoming more accessible to the mainstream public through LEGO toys and other hobby kits, and was still predominantly in the hands of male users and makers. I was interested in how this discipline was rich with possibilities— to be hybridized, radicalized, politicized. Television programs were priming mainstream America for Performative Robotics as a vehicle for violent entertainment (Robot Wars, Battle Bots). Additionally, several art and technology schools were hosting annual Robot Contests (Carnegie Mellon’s “Mobot Challenge,” etc…) that brought robotic performers additional currency and attention. The works in “Misbehaving” provide an alternative display of skills: a battle of the “psyches” instead of a battle of brute strength, and behavior that is as emotionally complex as much as it is technologically complicated.

She is Associate Professor at the School of Art & Design at the University of Michigan, Ann Arbor.
.
.
.
.
.
.
.
source: art-designumich

Throughout her career, Kumao has used new media and animation, kinetic/electronic sculpture, and performance art to create “performative technologies” meant to heighten the public’s awareness of everyday behavior and its underlying psychology.

Kumao’s current projects often use technology to address feminist issues and insert a female point of view into the world of high-tech innovation. In Misbehaving: Performative Media Machines Act Out, funded by the Creative Capital Foundation, hybrid machine “beings” represent women and girls who disobey or resist expectations. For WiredWear, funded by the U-M Office of the Vice-President for Research, she created articles of women’s clothing equipped with custom electronics that communicate with the wearer. During the 1990s, she devised “cinema machines” – sabotaged household objects outfitted with projectors. Kumao also works collaboratively with Preemptive Media, a group of artists, activists and technologists, to create projects around emerging technologies and corresponding policies.

Kumao’s work has appeared in solo exhibits at the Museo de Arte Moderno of Buenos Aires, Fundació Joan Miró in Barcelona, Center for the Arts-Yerba Buena Gardens in San Francisco, the New Museum of New York City, the Arizona State University Art Museum, and Hallwalls Contemporary Art Center in Buffalo, New York. Her work has also been included in numerous group shows, including Motion and Document – Sequence and Time: Edward Muybridge and Contemporary American Photography, which toured the U.S. for two years.

Kumao has received grants and fellowships from the New York Foundation for the Arts, the Creative Capital Foundation (NYC), Microsoft, and the National Endowment for the Arts. Her work is represented in both public and private collections nationwide.