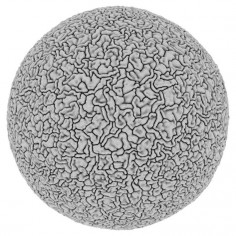 Andy Lomas, a digital artist and mathematician, likes to let the virtual world spin out of control. Using software code to creates very basic rules, Lomas then sits back and watches his digital “growth systems” bloom, fractalize, shape-shift, and otherwise behave in organic and emergent ways.

Yesterday, at the Los Angeles Center for Digital Arts (LACDA), Lomas’s Morphogenetic Creations opened, giving digital art enthusiasts the opportunity to see his dynamic virtual systems up close. The exhibit includes work from the Aggregation, Flow, and Cellular Forms series. To coincide with the exhibit, Lomas uploaded a view of these digital growth videos to Vimeo. Startlingly beautiful to behold, they’re a bit like Ernst Haeckel’s Art Forms of Nature animated with a cyberpunk edge.

I recently rang up Lomas, who lives in the United Kingdom, to talk about Morphogenetic Creations. We talked about his background in mathematics, his early fascination with D’Arcy Wentworth Thompson’s On Growth and Form, and how his work as a computer-generated effects artist for film (The Matrix sequels and Avatar), where highly-predictable outcomes and stability predominate, served as a springboard for the more random digital forms he now creates.

My original background is in mathematics, which I studied as an undergraduate. One of the main areas I got interested in is what’s called Dynamical Systems, which is sort of the math behind Chaos Theory and Complexity Theory—the math of how things change over time when you almost reapply the same rule again and again and again. So, the combination of those two, it’s almost like how simple could the rules be to make something that is as beautiful as a tree or coral or something like that. So, those two have always been like two germs working together. And, to my mind, computers are the things that allow you to actually try that out.
.
.
.
.
.
.
.
source: creativeapplications

Created by a mathematician, digital artist and Emmy award winning supervisor of computer generated effects – Andy Lomas, Morphogenetic Creations is a collection of works that explore the nature of complex forms that can be produced by digital simulation of growth systems. These pieces start with a simple initial form which is incrementally developed over time by adding iterative layers of complexity to the structure.

The aim is to create structures emergently: exploring generic similarities between many different forms in nature rather than recreating any particular organism. In the process he is exploring universal archetypal forms that can come from growth processes rather than top-down externally engineered design.

Programmed using C++ with CUDA, the series use a system of growth by deposition: small particles of matter are repeatedly deposited onto a growing structure to build incrementally over time. Rules are used to determine how new particles are created, and how they move before being deposited. Small changes to these rules can have dramatic effects on the final structure, in effect changing the environment in which the form is grown. To create these works, Andy uses the GPU as a compute device rather than as a display device. All the data is held in memory on the GPU and various kernel functions are called to do things like apply forces to the cells, make cells split, and to render the cells using ray-tracing. The simulations and rendering for each of the different animated structures within this piece take about 12 hours to run, Andy explains. By the end of the simulations there are over 50,000,000 cells in each structure.

The Cellular Forms use a more biological model, representing a simplified system of cellular growth. Structures are created out of interconnected cells, with rules for the forces between cells, as well as rules for how cells accumulate internal nutrients. When the nutrient level in a cell exceeds a given threshold the cell splits into two, with both the parent and daughter cells reconnecting to their immediate neighbours. Many different complex organic structures are seen to arise from subtle variations on these rules, creating forms with strong reminiscences of plants, corals, internal organs and micro-organisms.