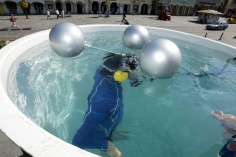 source: auger-loizeau
James Auger and Jimmy Loizeau have been collaborating on projects since the concept of the Audio Tooth Implant was first conceived in October 2000.

[Industrial] Design is mostly concerned with the process of bringing products to market – making them desirable and therefore saleable. By removing the commercial aspect from the development of the [designed] object, it can be given a different agenda, investigating the process that gives birth to it rather than being defined by it. In this way design can comment on consumer culture; the role of products in shaping human behaviour and experience and the role of technology. It becomes a tool for questioning rather than problem solving. Through the development and dissemination of speculative and critical artefacts Auger-Loizeau aim to instigate a broader analysis of what it means to exist in a technology rich environment both today and in the near future.  Our intention is for this analysis to take place over a broad a spectrum as possible.
Auger-Loizeau projects have been published and exhibited internationally, including MoMA, New York, 21_21, Tokyo, The Science Museum, London, The National Museum of China, Beijing, and the Ars Electronica festival, Linz and are part of the permanent collection at MoMA.

Many of our projects are self-generated and self-funded but we are also available for industry funded research projects, commissions and workshops.

The Isophone is essentially a telecommunications device providing a service that can be described simply as a meeting of the telephone and the floatation tank.
The user wears a helmet that blocks out all peripheral sensory distraction whilst keeping the head above the surface of the water. The water is heated to body temperature blurring the physical boundaries of the users body. Floating in this manner frees up to 90% of the brains workload normally engaged with calculating the lie of gravity. In combination, a space is created for providing a pure, distraction free environment for making a telephone call.

Only a couple of decades ago our primary means of telecommunication was the telephone box, this essentially provides a contextually neutral space for remote conversation. Entering a telephone box effectively equates to a cessation of all other activities allowing the individual to concentrate solely on the conversation. Here the designer not only considers the communication technology but also the space in which it is used.
The growth of mobile telephone usage however has led to telecommunication being practiced in an efficient rather that a qualitative manner. The mobile phone decontextualizes conversation. It extracts talk from specific social context, offering the user freedom to communicate from virtually any social situation regardless of the suitability. It is down to the sensitivity and discretion of the user to decide if their circumstances are suitable for communicating.

The Isophone attempts to redress this imbalance by providing a space totally dedicated to telecommunication. Effectively going against the grain of mainstream design, the Iso-phone trades contemporary preoccupation with efficient, ubiquitous and multi-functioning products for quality and depth of a singular experience, requiring total immersion into the telecommunications media.

The Iso-phone went to Ars Electronica in 2004. For this event we developed Iso-phone MKII. Utilizing and off the shelf scuba mask and telephone connection we provided full audience participation. Over the 4 days of the event over 40 people used the Iso-phone to make calls of 30 minutes each.
.
.
.
.
.
.
.
source: vimeo
Auger and Loizeau have been collaborating on projects since the Audio Tooth Implant concept was conceived whilst at the Royal College of Art in 2001.
Post RCA They were employed as Research Associates for Media Lab Europe (The European Partner of the MIT Media Lab), where the main focus of research was a design-based investigation into technology mediated human experience. (2002-2005)
Their methodology is the development of products and services that contradict and question current design ideology and the conspicuous consumption of technology.
Auger-Loizeau’s projects have been published and exhibited internationally, including MoMA, New York, 21_21, Tokyo, The Science Museum, London and the Ars Electronica festival, Linz and is in the permanent collection at MoMA.
They regularly present at conferences and teach on the Design Interactions course at the Royal College of Art (Auger) and Goldsmiths University (Loizeau)