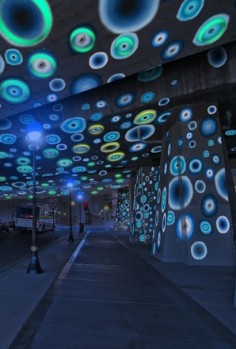 I strive for my work to both conceptually and phenomenologically engage the viewer on various levels. The physical space the artwork inhabits is almost always part of the equation….an added voice to the project that provides additional history, layers and meaning. Whether that site is within nature, an urban environment or a highly refined gallery there is always added experience of the place.

Another part of the equation is the viewer/ participant. Originally trained in the theatre, I see the artwork not just about objects at a location, but as volumes of space to manipulate and about the relationships and choreography between the environment and the viewer/participant. It is also about the hierarchy of experience, what is seen and experienced in what order. How does time and the movement of people or the artwork vary the perception of the piece?

And then there is me; the artist, provocateur, scientist, and magician that loves to reveal or find that point of transformation of knowledge or perception. Each project tells a different story.

I perhaps am best known for working with light in its myriad of forms- creating environments that radically transform from day to night. But my work goes beyond seductive eye-candy, raising questions, probing the subconscious and engaging phenomenological experiences. The content, media and breadth of the work is wide, but I feel there is a solitary vision and rigorous conceptual underpinnings that unify the work.
.
.
.
.
.
.
.
source: designboom
dan corson transforms dreary underpasses into interactive gateways in san jose

located within the core of downtown san josé in california, dan corson has transformed two dreary underpasses by turning them into bright, cheerful, and interactive urban experiences. the two illuminated art pieces called ‘sensing YOU’ and ‘sensing WATER’ utilize paint, light, and interactive technology, and together they create a dynamic awareness of the city’s downtown. the gateway route is used by commuters, residents, and visitors daily.

the project is composed of over 1.000 painted rings and 81 individually controlled LED dimensional halos that respond to motion sensors targeted to pedestrian walking areas and bike lanes. from a car safety perspective, the lighting animations are designed to be slow enough so the average car will not see any movement when driving past, but that while walking through or pausing, the movement will be highly discernible.

in the highway 87 underpass at santa clara street, ‘sensing YOU’ is a collection of light rings that create a wide array of colors and patterns, except for red, green or yellow, the common traffic colors. the lights change in response to pedestrian and bicycle traffic under the highway. the light patterns change just by passing through it. the project is also integrated with an online smartphone game called ‘ingress’.

on the other hand, ‘sensing WATER’ utilizes paint and projected lighting that resembles flowing water and the aurora borealis. this piece is influenced by real-time changes in the weather and wind that affect the guadalupe river. this river flows under the highway at this junction. the light artwork accesses live data from the NOAA website which provides the patterning for the nightly projections.