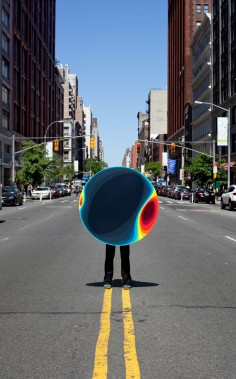 source: jankalab
When Jan Kaláb was born in 1978 in Czechoslovakia, graffiti was not to be seen in the Eastern World. In the nineties, as the country was opening itself to western influences, he became one of the pioneer of the local scene, and founded an iconic crew, the DSK. Sleepless nights around train yards, light tubes at police stations and above all hard work on his style: he went through all the classical steps of a writer’s career. Through Europe, he made a name for himself as Cakes. Next step to the Hall of fame: New York, where he made a big impression by painting whole cars in 2000, alongside with Key and Rome. Around the same time, he found a new way to push his own limits and challenge himself: 3-D Graffiti. Under the name of Point, he sculpted huge abstracts letters he chose to put in the streets and on the walls. The highest the better. This was another form of graffiti, in daylight, and without a spray, but truthful to the spirit of competition and innovation of the urban scene. Those sculptures lead him to abstraction, a path he’s been exploring through canvas from 2007, using acrylic painting and brushes. In the meantime, this admirer of Kupka graduated from the Academy of fine Arts of Prague – becoming the first Czech writer to do so. Jan Kaláb had his first solo exhibition in 2008 in Prague. Others solos took place in Romania, Argentina, Germania or in the United States. With time, his forms became more and more geometric. He used colourful squares and circles as an obsessive vocabulary for infinite variations around depth, time, and motion. Playing with circles conveyed organic imperfection and swing into his work. Dynamic is also crucial in his recent experiments, when he took pictures of some of his paintings in the streets of New York or other cities. The project became a social one when he realised he needed help from strangers to carry the canvas. This is no surprise, since collective energy is crucial in his creative process. The artist is very invested in collective events. He’s the co-creator of a highly dynamic cultural space in Prague, called Trafačka. More than 160 exhibitions took place there from the opening in 2006 till the closure in 2015. On his own or collectively, the motto is the same: always getting higher, always inventing new forms – a tribute to the soul of graffiti.
.
.
.
.
.
.
.
source: kathleenloe
Running through the late night streets of Prague in the early 1990’s, Jan Kaláb and his contemporaries tagged the walls of their 11th century city. Fifteen-year-old boys and cans of spray paint exhibiting similar states of ‘contents under pressure’, they were frequently arrested. Born in 1978, Kaláb was part of the second generation of graffiti writers in the Czech Republic. The Velvet Revolution of 1989 had opened borders and allowed the exchange of culture at the perfect time for Jan to be coming of age as an artist. In 1994 and 1995 he travelled first to Berlin, only three-plus hours away, to visit graffiti shops and then more widely in Europe, South America, and the U.S. New York held a particular weight in the world of street art with its hip-hop culture and infamously tagged subway cars from the 70’s and 80’s. Jan and his friends made a pilgrimage of sorts to New York with the mission of tagging their own subway car, inserting themselves into the history of that celebrated subculture.

Jan adopted the Czech words SPLESH and CAK as his tags. Wanting a longer form to work with, he added an E, then an S to CAK, not aware of the English meaning. Post-translation, CAKES was a bit of a disappointment, the artist admits, but he kept the tag both for continuity and the pleasure in painting those specific letters. In 2002, Kaláb was expanding the relationship of form to content via graffiti writing as he entered the Fine Arts Academy, Prague’s oldest and most prestigious graduate school. The malleable shapes of the letters were suggesting color, scale and line quality. He developed 3D graffiti sculptures with the more suggestively volumetric letters of the word POINT and tucked them on the outside of buildings around the school, like a synthetic cubist Andy Goldsworthy.

Jan’s greatest influence has been Frantisek Kupka, the pioneer Czech painter and co-founder of the early phases of the abstract art movement in Europe. Unlike U.S. graffiti icons Keith Haring and Basquiat, Jan’s work matured toward formal intricacies rather than activism. Kaláb compares his gradual progression from street art to a studio practice to a scientist’s investigative methodology. Each new compositional approach to the interconnectedness of letter forms moved him father away from writing and closer to non-representational abstraction. A transitional project around 2005 involved painting small rocks from the street in bright colors and replacing them in the spaces where pavement was missing. This expanded to painting large areas of color on the city sidewalks in quasi-geometric shapes formed by cracks and stains in the pavement. Kaláb photographed these scenes and reproduced them as black and white Xeroxes onto which he re-painted the colored interventions. The Xeroxes were exhibited much the way Earthworks sculptors produced artsy photographic documentation aimed at the larger viewing audience of galleries and museums.

Moving the work into gallery spaces presented several new aesthetic issues. The scale, speed, and graphic invention of guerilla graffiti were the foundation for his current refined and complex abstractions. However, graffiti writing on canvas made no sense in the absence of the found urban setting. Without that expansive environmental context he was forced to invent pictorial space. The world of the painting now stopped at the edge of the canvas. Kaláb continued the mural scale, working as large as his studio constraints would allow.

In 2014 he created a project that returned him to art in the streets of New York City. After making a series of minimalist paintings on canvas between 3 and four feet wide, he transported them one at a time on the subway from his Brooklyn studio to a location in Manhattan. He would convince a selected stranger to hold a painting in the middle of the avenue for a photograph. Sometimes this took ten minutes, sometimes two hours, to find the right, and willing, collaborator. This temporary presenter’s legs and shoes along with the amount of the city captured in the frame finished the piece. The photographs of people holding paintings in the streets were exhibited in a pop-up show on the Lower East Side he called Art In Public.

Jan Kaláb is now a prolific Prague-based, internationally exhibited painter and sculptor, and a force in the current vibrant art scene there. In divergent neighborhoods far from the heavily touristed Old Town, contemporary Prague supports a fourth generation international biennale; Umelec, a contemporary art magazine that publishes in four languages, including English; and many new experimental galleries, museums, and industrial exhibition spaces. Although Jan says it’s a relatively small scene, Prague provides social continuity, affordable studio space and a proven network of fabricators and suppliers for his work. He is self-supporting as an artist, which he admits would be very difficult in the U.S. Grant money is still relatively available in support of artistic projects in the Czech Republic. Along with his formidable energy for work, Jan’s sales and commissions allow him the freedom to travel and organize blocks of time to work in other countries when he likes. He is currently working on an exhibition for Germany and is returning to New York this spring to participate in Artexpo 2015.

Kaláb has honed his remarkable ability to organize a simple geometric cast of characters into refined and complex abstractions. For a few years he has been involved with intricate pieces formed from layering several equal-sized canvases and cutting out shapes from each canvas to create both real and illusionistic space and perspective. These elegant constructions could be planetary systems or mysterious mechanical diagrams. A significant precursor for this approach was the Argentine-born Lucio Fontana’ experiments in slashing and perforating canvas as part of the Arte Povera and Spatialism movements in Italy.