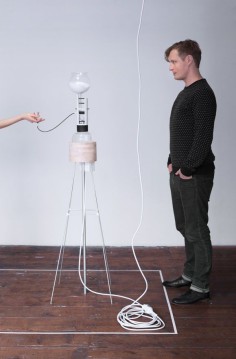 source: jasnadimitrovska
“Only a machine is transparent and only two machines can communicate with each other in a transparent way”
– Byung Chul Han, Transparenzgesellschaft

Three Machines on transparency is a project that is imagined as an “exhibition by appointment” where the artist guides the audience throughout the gallery installation. The machines represent artefacts that “do” philosophy or prototypes that materialize ideas. By demonstrating their functionality the artist synthesizes philosophical concepts into the corporeality of the physical prototypes.
The principals of their construction and engineering are themselves a quest in transparency. Using shared knowledge in the form of rapid prototyping, public internet “how to” tutorials, building manuals, “tips and tricks” and shared public modular grid for designing, the process becomes open, horizontal and democratic.
On the other hand, without demonstration and information, the machines themselves remain semantically closed and unavailable. They attempt to grasp philosophical complexities trough design by producing another type of scholarship that resembles the written one.
“The Prison” is an observational device, “The Gaze” is a proto-lens and “The Time” vanishes into it’s own transparency.
The “transparency room” showcases a short film of the design process (the development of models and prototypes) filmed with a camera phone thus paying homage to the origin of the machines (the internet tutorials) as the last argument in transparency.
.
.
.
.
.
.
.
source: jasnadimitrovska
I am a designer that builds models, prototypes and cultural probes to investigate the meaning of human interaction with digital objects.

My challenge is the the non-human factor where various building materials and media are connected in a system that needs to meet large number or parameters and protocols.