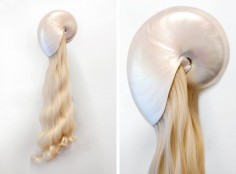 Work: “Humanity is exalted not because we are so far above other living creatures, but because knowing them well elevates the very concept of life.” – E. O. Wilson Jenny Kendler’s work explores human beings’ complex relationships with the natural world. She presents her intimate drawings, sculptures and installations as a counterpoint to the view of nature as something to be possessed, suggesting instead, it is we who are possessed by nature. Working at the intersection of art, activism, and natural science, Kendler seeks to complicate the space between Nature and Culture and to re-enchant human beings’ relationship with the natural world. She asks us to reexamine the idea of ‘nature’ as something outside ourselves, making space to welcome the radical, transformative otherness of the our staggeringly bio-diverse Earth. Through respecting this otherness, and attempting non-anthropocentric interspecies relationships, she searches for ways to begin to understand the interiority of these unfathomably rich and strange autonomous ‘animal-worlds of being’. It is only through this search that Kendler believes we can begin to truly understand the story of human evolution and actualize the human/animal waiting within us all. In the words of Rilke’ “If we surrender to earth’s intelligence, we could rise up rooted like trees.” Joseph Beuys believed that artists and shamans are tasked to reawaken our innate animal aptitudes, and shake people out of enculturated, habituated states of mind. Through her practice, Kendler hopes to assist with this rediscovery our latent animal faculties, in order to work towards mending our relationships with these many “others” with which we share our Earth. Cross-pollinating art, science, feminism and environmental activism, Kendler seeks to reinvent “the Naturalist” for an era of new challenges. She is particularly interested in showing how the feminization and othering of the Earth allows for reckless exploitation of “natural resources,” and how the continuing lack of recognition in the public consciousness of our status as animals ourselves props up this artificial separation. Seeking diverse audiences with which to start conversations about the natural world, Kendler is interested in public art and interventions and staging works in unexpected locations, as well activist art projects that live outside the white-walls gallery system, such as The Endangered Species Print Project, a collaborative project with Molly Schafer which has raised almost $12,000 for biodiversity conservation. Throughout this diverse practice, she seeks to de-constructs clichéd abstractions of nature, seeking to reinvigorate participation in the natural world and re-sensitize the public to its wonders. Kendler uses delicacy, ornamentation and intricacy to echo the subtle and mysterious patterns of the living world. These seemingly fragile works draw viewers in, rekindling feelings of interconnection and wonderment.
Photographer: Jenny Kendler
.
.
.
.
.
.
.
source: jennykendler

Jenny Kendler is a multimedia artist, naturalist, wild forager & social entrepreneur who lives in Chicago and Los Angeles. She is currently the first ever artist-in-residence at Natural Resources Defense Council (NRDC). This year long, grant-supported residency creates opportunities for diverse public engagement, furthering the dialogue about environmental issues through art.

Kendler is co-founder of the artist website service OtherPeoplesPixels, and created the The OPPfund, which gives grants to arts, environmental and social justice organizations.

She is also the co-creator of The Endangered Species Print Project, which creates limited-edition art prints to raise funds for critically endangered species, and has to date has raised almost $12,000 for conservation. ESPP will have its first museum show in 2014 at The Peggy Notebaert Nature Museum as part of Project Passenger Pigeon, a nationwide effort to highlight the extinction crisis on the 100th anniversary of the extinction of the passenger pigeon.

Kendler has exhibited nationally & internationally at venues including Exit Art (NYC), La Box (France), The Yeosu Art Festival (Korea), Claremorris Gallery (Ireland), Root Division (SF), Kristi Engle (LA), Public Pool (Detroit), and in Chicago at Columbia College and Gallery 400 among others. Recent solo exhibitions include Johalla Projects (2010), ADA Gallery (2011), The BOLT Residency Gallery at CAC, where she was artist in residence from 2011-2012, THE SUB-MISSION (2013), and the Salon Series Project Space (2013).

Her work has been covered on Chicago’s ABC7 News and in Orion Magazine, The Chicago Tribune, Businessweek, The American Scholar, Juxtapoz, ReadyMade Magazine, and she and her work have appeared on the cover of The Chicago Reader twice. The Endangered Species Condom Project, for which she created art, was profiled in The New York Times and featured on a billboard in Times Square.

Kendler is represented by Mulherin + Pollard in NYC and ADA Gallery in Richmond, VA.

Jenny Kendler’s work explores humans beings’ complex relationship(s) with the natural world. She presents her intimate drawings and sculptures as a counterpoint to the view of nature as something to be possessed. She suggests instead, that it is we who are possessed by nature.

In her practice, she reinvents ‘the Naturalist’ through the lens of feminism and environmental activism. Kendler is particularly interested in how concepts of gender (such as ‘feminization’ of the Earth), and thoughts on our often-denied animal nature influence humanity’s relationship with the natural world.

As a wild forager, environmental activist, and fundraiser for environmental/social justice, Kendler cross-pollinates genres and mediums. In keeping with this commitment to ecological justice, she donates a portion of profits from her work to organizations working in this field.

Coming from a family of scientists, her work often incorporates language from the history of natural science: The Specimen, the Wunderkammer, the Museum, The Relic. She is deeply interested in intermingling scientific and artistic practices, and sees building an organization to encourages these collaborations as a life-long goal. For newer works, her research is taking her towards investigating animal (primordial) consciousness and its implications for the nature of human consciousness.

Her work seeks to draw us viscerally and emotionally nearer to nature, rekindling feelings of interconnectedness and wonderment. Kendler uses delicacy, fragility, ornamentation and intricacy, alongside the cultural tactics of magic and fantasy to echo the subtle and mysterious patterns of the living world.

Rather than show us a dichotomy, Kendler seeks to complicate the relationship between Nature and Culture. Alluding to this, both “real” and “fake” materials are used in her sculptural work — for example recycled vintage animal fur with faux fur or wild moss with imitation plastic moss.

Kendler is interested in de-constructing our clichéd abstractions of nature, seeking to reclaim and reinvigorate our participation in the natural world…and re-sensitize us to it’s wonders. She creates for us a visceral, bodily experience with ecological issues as “well-travelled” as extinction, habitat loss and climate change.

Presenting moments of crisis or wonder, Kendler hands us this tenuous thread to the natural world — shadowing forth possibilities of reclaimed ecological attunement and reconciliation.