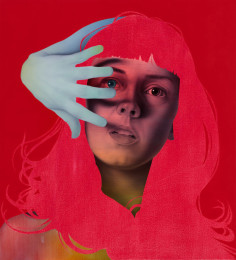 source:artsynet
In her portraits, Jenny Morgan paints photorealistic nudes suffused with fantastical color, distorted by gestural blurs, and sometimes framed by abstracted shapes. Her subjects are most often friends or self-portraits, as having a personal connection with the subject is essential to the artist. Echoing this intimacy, her figures hold eye contact to forge a psychological connection with the viewer. Morgan’s recent portrait series “All We Have is Now” invokes themes of death and rebirth with nods to religious imagery and symbols of mortality. The heady subject matter may seem at odds with the intense color that suffuses her figures—however, it is the push and pull between darkness and light that interests Morgan, to “look at everything in the light and realize it no longer feels so dark,” as she has said.
.
.
.
.
.
.
.
source:driscollbabcockcom
This new series of paintings present amorphous, yet graphically stark figures rendered in a richly saturated prismatic array of colors. Centered on themes of life, death, and rebirth, Morgan’s works question how we relate to our past and challenge us to live in the present.

Morgan painted the skeletal work, IN THE MOMENT (DEATH HYMN), by rendering each bone individually, without any prior plotting or planning. The end result shows not only a variety of techniques and colors, but a sense of spontaneity, freedom and immediacy. For a subject matter so deeply entrenched in death, the end result is a life affirming meditation.

In SKELETON WOMAN life and death connect in the forms of a darkened skeleton draped over the exuberant figure of a woman. While the heft of the skeleton could weigh the figure down, she balances with an almost weightless pose. For Morgan these works are about “releasing old skeletons” and being able to “look at everything in the light and realize it no longer feels so dark.”

YOU ONLY LIVE ONCE is a self-portrait of the artist with the essence of new life- a baby. Amongst the images of death, this piece brings the show full circle with a life-affirming beacon. Brutally earnest, Morgan lays bare her own concerns about motherhood, self-perception and the future.

Deeply personal, yet thoroughly universal, the works in All We Have is Now achieve a striking intensity and psychological depth, breaking through the ideals of traditional portraiture and the preciousness of realism.
.
.
.
.
.
.
.
source:beerslondoncom
Jenny Morgan is one of the most recognisable young artists painting the figurative form today. Her work intertwines figurative realism with graphic forms, demonstrating exceptional technique paired with a subtle and confident use of abstraction. Reverberating with an almost religious aura, Morgan’s work suggests psychedelic flashes or perhaps figures in transformative, or transcendent processes. As Morgan explains, the work ‘manipulates the figure to expose the individual’s idiosyncrasies and create a physiological portrait’. In fact, Morgan seems to do away with any extraneous information, focusing the painting on the specific psychological state of the sitter, presenting their personalities as she herself experiences them. In short, these vivid portraits are grand metaphorical insights into into the personality of the individual represented.

JENNY MORGAN (b. 1982, Salt Lake City, UT) holds a BA from the Rocky Mountain College School of Design in Lakewood, Colorado and an MFA from the School of Visual Arts in New York, NY. Morgan’s work has received critical attention in numerous publications including Whitewall, Hi-Fructose, The Village Voice, and The Denver Post, the highlight being her cover feature in Juxtapoz in May 2015. Her 2013 solo exhibition ‘How To Find A Ghost’ was named one of the top 100 fall shows worldwide by Modern Painters in 2013. Additionally, Morgan has realized several portraiture commissions for publications including The New York Times Magazine and New York Magazine. She has had solo exhibitions in New York, Colorado, Utah and Indiana and has been in numerous group exhibitions including the Smithsonian National Portrait Gallery, Washington, D.C. and the 92Y Tribeca, New York.