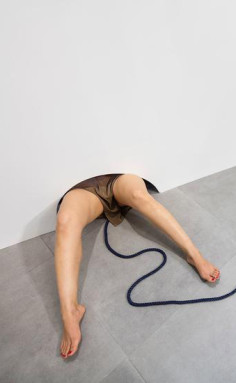 source:hyperallergiccom
Laura Lima’s The Inverse isn’t experienced so much as it’s encountered: the massive swath of rope, deep blue and thickly knotted, traverses the entirety of the Institute of Contemporary Art (ICA) Miami’s Atrium Gallery, looping itself over beams and columns and scraping the floor. The varying thickness and gradient of color throughout renders the rope an overwhelming morass of textures, and at any level of the space from which it is viewed it’s difficult to determine if it’s one rope or many. It feels tempting to touch.

It’s also impossible to examine The Inverse without referencing its recent controversy. In a move not atypical for Lima, whose large-scale installations both “subject the body to surprising juxtapositions with objects and architectures” (a quote from the show’s press release) and toy with the unseen, the rope, gradually dwindling in size, ends in a makeshift room where, as outlined by the artist’s intent, it “merges with a female body.” To be clear, the rope ends in the woman’s vagina, sheathed, as it were, by a finger cot — a detail not explicitly shared with museumgoers. The woman is one of several performers who rotate in shifts throughout the installation’s duration. Only her feet are visible, poking through a mouse-sized hole in the room’s wall; at the show’s opening, people bent down to see the entirety of the performer’s body, but — thankfully — couldn’t even if they tried.

A few of the performers, unsurprisingly, felt uncomfortable with the rope’s placement; one in particular, who thought insertion was optional, felt coerced. Though it’s described in more detail here, there seems to have been some miscommunication: the ICA’s staff didn’t want their performers forced into anything that made them uncomfortable; meanwhile, Lima insisted on the insertion of the rope as essential to the piece — to her understanding, it was empowering. From here, the situation becomes more complicated; it’s easy to ask why the aforementioned performer didn’t simply decline and walk away — but then, it’s also unfair, since the actual specifics of what ensued are unbeknownst to anyone but the performer involved.

Viewers, then, can only understand The Inverse on the outside, which is precisely Lima’s intention. During the show’s installation, she told Hyperallergic:

“I am working with the perception of the place. I set the piece up so that you have to move yourself to discover its details. There are many things that arrive at the perception of the viewer — some are more important than the others — and I like that some of it gets lost. It’s not going to be obvious. You don’t know what’s going on behind the wall — but she is there. She knows a lot about the piece, and she is committed to engaging with the idea. In some ways, this is a universal subject, for centuries or millenniums, this subject of women. It is a more empowering thing. They are going to do it by themselves and they are, in a certain way, the ones who will take care of the piece.”

Taken from the perspective of the artist-as-designer but not participant, these ideas seem reasonable: by hiding this hugely important component of the show, Lima hopes that it will affect the viewer’s understanding of the work in some subconscious way. And maybe silently holding the literal end of the rope inside one’s own body could feel somehow special, even if it is a secret and especially if Lima had previously discussed it with the performer at length.

Even if the exhibition’s details remain hidden, though, we are still exposed to a body and forced to consider it. And once the rope’s intended placement is disclosed, one wonders how to approach the work as a whole. When she began doing performative, sculptural work, Lima understood that “the participant — doesn’t matter if it’s me or not — was constructing a certain subjectivity, a certain experience.”

“At that point, this was not important to me, even if I understood that it was happening. I was not constructing subjectivity. There was no hierarchy between material and flesh. In Brazil, we had people like Lygia Clark, who were in a different political moment. They were in a dictatorship, and trying to construct subjectivity. When I started in the 1990s, my goals were completely different. I was trying to construct an image with living beings, and create lots of contradictions and paradoxes about working with living beings. We could talk about ethics. Part of being in this work is to raise lots of subjects. Sometimes it’s shock. Sometimes it is empathy.”

For Lima, it seems, the goal is to strip her work of any specific social context and have it exist almost as a purely visual encounter. “You are living in a certain moment or time when people are discussing things,” she said, “but you have to encounter a piece that is talking about materiality and universality first. It’s about encountering. Art just exists for that. It has to appear and be a kind of phenomenon.” The installation certainly does impress in its weighty materials and sheer magnitude. But what are the aforementioned “things” people might be discussing in this moment or time? She spoke generally enough to refer to any moment in time, as if to remove the work from any social context it might have (such as the often casual or intrinsic abuse of the female body, female autonomy, or even performance politics as a whole) — a feat that seems impossible. If art is just for encountering, why shock at all? What are the ethics we can discuss?

The Inverse is guided by the same thought process that produced Man=flesh/Woman= flesh – FLAT, in which participants, all of whom were disabled (Lima did not always refer to them as such, and instead said their bodies carried a special history), lay on a floor inside an impossibly small room; viewers again crouched down to view them through a small hole. Unlike The Inverse, however, this installation involved only bodies; nothing was hidden for long, and what was there was exactly what viewers saw. How can the emphasis then be placed on materiality, as opposed to bodily subjectivity and experiential understanding? There’s a human experience and, as such, a human interaction — even if it’s unexpectedly stumbling on a pair of feet — and as a result the work can no longer be about materiality.

Perhaps The Inverse is, simultaneously, weirdly at home in Lima’s oeuvre and strikingly at odds with it. The charming, strange qualities of pieces like Bar Restaurant (in which geometric figures sat at tables to “drink” mysteriously disappearing beverages) or The Naked Magician (the magician, in a haphazardly lopsided room, performs mundane tasks), where viewers are witness to a phenomenon they need not fully understand, are taken to a sticky extreme. In response to Lima’s suggestion, it’s challenging to view a work without any timely sociocultural framework — but it’s harder still to understand the installation without including its own problems. The rope itself unwittingly insinuates bondage; in making it blue, the intention, she said, was to make it hyper-synthetic, thereby separating it from the body. But its contrast to the performer’s flesh further compounds the problem, emphasizing that the body is no material, no secret. In any time period, it is dangerous for the female form to be reduced to its appendages. If Lima perceives her work as a catalytic structure onto which various contradictions might be projected (like anything else, right?), there ought to be the expectation that signifiers get filled with meaning simply by virtue of existing. As much as a set of feet, a winding rope, and a mostly hidden cervix can signify space, mystery, and, yes, materiality, they also reek, unwittingly or not, of quiet, violent constraint.
.
.
.
.
.
.
.
source:premiopipacom
Mineira radicada no Rio de Janeiro, é formada em Filosofia pela Universidade Estadual do Rio de Janeiro. Frequentou a Escola de Artes Visuais do Parque Lage no Rio de Janeiro. Fundou em 2003, com os artistas Ernesto Neto e Márcio Botner, a galeria de arte A Gentil Carioca.