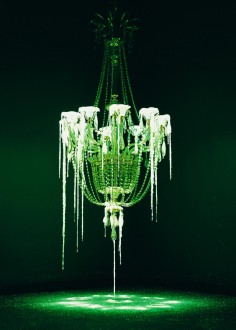 Jiang Pengyi‘s latest series, Everything Illuminates, sees the artist mixing fluorescent powders with liquid wax, and applying it to various, commonly-found objects. Pengyi then documents these applications, capturing in a time a brief moments where the objects were not just illuminated, but focused on for consideration through art. According to the Hunan-Province-born artist’s statement, these images “suggest the artist’s changing focus back to original form and shape, at the same time reflect his current state of mind.”
Pengyi was recently selected to participate in Artshare.com’s group showing of note-worthy Chinese artists born between 1977 and 1987, called Another Light. The show’s catalogue references the artist’s past works, which focused on the rapidly-evolving city and industrial spaces in China, and a slowing down in focus for his newer works, where each object becomes precious and unique. “In Jiang’s Everything Illuminates series, the mystique of autonomous objects is revealed in delicate depiction…Through the passage of time, these objects slowly take on their new forms on film and emit individual signals from their uncommon glow, as they emerge in a bewitching existence.”
.
.
.
.
.
.
.
source: mymodernmet

Chinese artist Jiang Pengyi mixes liquid wax and fluorescent powder onto objects to create surreal art you can’t get out of your mind. He lets the fluorescence trace the objects’ forms and then watches how the mixture transforms the inanimate objects into haunting ones. Called Everything Illuminates, the series of glow-in-the-dark objects asks us to think about the existence of intrinsic light while reminding us about the destruction of form and function over time.

Born in Hunan Province, China in 1977, Pengyi was recently a part of Artshare.com’s group show called Another Light that brought together outstanding emerging artists from China who were born between 1977 and 1987. His work has been exhibited worldwide including in cities like Moscow, Beijing, New York, and London.
.
.
.
.
.
.
.
source: blindspotgallery
生於1977年，中國湖南省沅江市