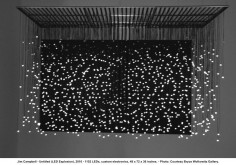 source: movingimageus
The artist Jim Campbell (b. 1956) works with LED lights to create extremely low-resolution images, exploring the margins of visual perception and revealing how much or how little information is required for comprehension. “Using simple technologies, Campbell recaptures both a sense of wonder and a joy in the act of observing that we seldom find in art today,” writes Matt Stromberg in Art Practical.

Exploded View, consisting of 1,152 hanging white LEDs, extrudes a traditionally two-dimensional surface into three dimensions. From most perspectives, the work appears as a random array of blinking lights. But from a privileged vantage point, the subject shifts into focus: figures barely decipherable by the eye but strangely comprehensible to the mind. As Stromberg writes, “When viewing his works, one is reminded of the wonder that early viewers of cinema must have felt when stunning reproductions of the everyday world grew out of the simple combination of metal, glass, and light.”
.
.
.
.
.
.
.
source: forumevilmadscientist
I want from all sides for the LEDs to look randomly placed and floating however from the front or back you would be able to view animation. Im running 2 conductor wire to each LED position then to the LED. The wire will be routed through a piece of material with holes drilled to form a 25 x 25 grid with 1 inch between each hole. To create the randomness I would need to change the depth for the each LED on the top row. I could manually just drop the wire down a different hole to create the randomness but it would create a mess of wires and use more material. If I could remap the output then I could just go 1 to 1 with the LED position to holes then use the software to set where each pixel pops up. I don’t have a preferred program or environment to do this in. I would like to keep everything as close to the current code and setup as it is now so that I could explore other ways to mess with input following write ups others have done.
.
.
.
.
.
.
.
source: rihangowordpress
Jim Campbell is a contemporary San Francisco based artist who primarily works with LED light installations. Jim Campbell was born in Chicago in 1956 and now lives in San Francisco. He received two Bachelor of Science degrees in Mathematics and Engineering. Cambpell began his artistic career in film making but switched to electronic sculpture in 1990 and started making his iconic LED matrix works in 2000. His current work combines film, sound, and LED light installations. He has emerged as a leading figure in new media arts.

His work is included in the collections of the San Francisco Museum of Modern Art, the University Art Museum at Berkeley; and that of Don Fisher of the Gap Corporation. In 1992 he created one of the first permanent public interactive video artworks in the U.S. in Phoenix, Arizona.

In 1988, coming from a technical background in engineering and an artistic background in filmmaking, I began to create interactive video installations that involve the viewer and the viewer’s response to a given situation. In creating interactive video art work, my goal has been to move away from the conventional computer screen “button pushing” interface and instead to move towards creating works that have a more intuitive level of interaction. Making a distinction between a work that is controllable and a work that is responsive. I have tried to create installations that are less about a viewer dominating a work, and more about viewers participating in the developing personality of a work. My work incorporates electronic memory, prerecorded images and live images.

Attempting to create systems that respond and progress in recognizably non-random, but at the same time unpredictable ways, I have tried to create works that have destines of their own. Having always been fascinated with the philosophical analogies of certain scientific disciplines, my work has been very influenced by science, in particular some of the ideas relating to chaos and mechanics. Using technological tools and scientific models as metaphors for memory and illusion, my work seeks to interpret, represent and mirror psychological states and processes, and their breakdown. Time and memory, individual and collective, electronic and real are the elements of my work.