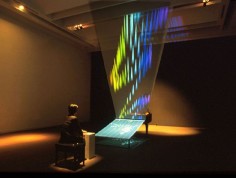 source: musejhuedu
Toshio Iwai’s first interactive works were experimental animations and precinematic “toys,” such as flipbooks and zoetropes. Since 1986 he has used the computer to create “visual music systems.” In his early piece Well of Lights (1992), which he developed while artist in residence at the San Francisco Exploratorium, Iwai used computer graphics and a video projector to create several hundred animated aquatic creatures that “swam,” played and changed form in an ethereally vivid blue environment that suggested both air and water. Another early piece, Music Insects (1992), merged sound and computer images to create abstract “music insects” that “reacted” to color dots on the computer screen. (The dots trigger musical scales, light patterns and sounds.) The user creates a color path for the insects and random musical performances that the artist has termed “visual music.”

Iwai’s Piano — As Image Media (1995), a later sound work, is related to these early interactive experiments. Here the user, seated at the piano, triggers a flow of images that depress the piano’s keys; a consequence of this action releases yet another flight of images. The resulting interactive installation synthesizes two different aesthetics: sounds (simple melodies), images and a mechanical object (the piano) with digital media. A projected score and computer-generated imagery transform the piano into image media, hence the work’s name.

Sound is the triumphant component in these works, for it activates and shapes the visual work. But the visual aspect of Iwai’s installations is lovely. His interactive systems appeal to the creative impulses of adults and children alike with their celebration of animation, computer potential, and the joy of sound.
.
.
.
.
.
.
.
source: ntticcorjp
Born in Kira, Aichi Prefecture, in 1962.

It was following his matriculation in the Fine Arts Department at Tsukuba University in 1981 that Iwai became involved in experimental animation, the experience which inspired his interest in making videos. While becoming involved with film and video, he became interested in the potential of flip books, zoetropes and other visual illusions that were precursors to film. His interests then shifted to art produced on computers. In 1985, while Iwai was still a student, his installation Time Stratum won the High Technology Art Exhibition Gold prize. He also won the grand prize at the 17th annual Modern Japanese Art Awards, becoming the youngest artist ever to win the award. In 1987, following the completion of his work at Tsukuba University’s Plastic Art and Mixed Media master’s course, he went on to exhibit his interactive art at shows both in Japan and overseas, winning wide acclaim.

His works were displayed at the Seville EXPO in 1992 in Spain, at the EC Japan Fest in 1993 in Antwerp, Belgium, at the Biennale d?t contemporain de Lyon in 1995, at the Mediascape Exhibition at the Guggenheim Museum in New York in 1996, and at the G7 Summit Exhibition in Lyon in 1997. As these examples demonstration, he has become one of Japan’s leading artists and continues to exhibit his work world-wide.

Iwai is a multitalented creator whose works also include the creation of characters and computer graphic designs for Fuji Televisions, “Einstein TV” and “Ugo Ugo Lhuga” TV programs, as well as computer game software.

In 1996 Iwai published a Windows CD-ROM “Simtunes” in the United States, issued in Japanese, German and French editions. He has also been active in many locations overseas. In 1991-92, he was based at the San Francisco Exploratorium. In 1994-95, he was a visiting artist at ZKM in Karlsruhe, Germany, where his work included a major one-man show. In 1997 he had a retrospective exhibition/ innovative workshops at ICC in Tokyo.

In recent years, Iwai has been particularly interested in the relationship of sound and image. One major result of this interest was the performance in collaboration with Sakamoto Ryuichi first at the Art Tower MIto, Japan. This performance went on to which the Golden Nica the Interactive Art Division at the 1997 Prix Ars Electronica in Linz, Austria. Currently Iwai is avisiting artist at the Mixed Reality Systems Laboratory Inc. in Yokohama, where he is involved in research and creative work related to Mixed Reality, preparing new work for display on TV as well as in exhibitions both in Japan and abroad.
.
.
.
.
.
.
.
source: nydigitalsalonorg
Iwai visualized an image of a piano played by light in his Piano as image media. Audience members operate a trackball to draw lighted dots on a grid. The flashing dots move, and as soon as they come close to the piano they accelerate and strike a key. With the sound of the piano, a three-dimensional figure pops out of the keyboard. The audience-drawn shapes play the actual piano. The sound then produces colors and figures. This is not a digital sound, but the sound of an acoustic piano controlled by computer. Combinations of computer graphics, liberated from the feel and weight of a grand piano, merge and integrate the elements of our real physical body and virtual body, which makes this work truly innovative.