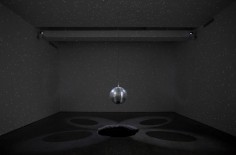 American artist Jim Hodges has always had an innate ability to impress ideas of time into commonplace objects, whether using napkins for drawings, silk flowers pinned to walls or collections of broken mirrors. In his work, Untitled (2011), metaphors for nature are again followed by human involvement, allowing for reflection from the smallest material interactions.
Comprised of four boulders which are capped with stainless steel veneers in gold, pink, lavender and blue, Untitled finds each stone arranged into a circular environment that directly invokes the viewer’s sense of space. Light and reflection play a role in the viewing, as colors meld and give the stones a surprising airy and weightless quality. Untitled’s colors were inspired by Hodges’ travels to India, where Hodges was enamored by the intense use of color, as he describes, “this layering, layering, layering of material, to the point where what’s being covered, its identity, seemed to start being erased by the accumulation of color.”
Scale is equally important to Untitled, and speaks to themes of change and impermanence. The works are quite massive, with each boulder measuring close to six feet in height and collectively weighing almost 90,000 pounds. Collected in Massachusetts, before being brought to a fabricators in Upstate New York, the boulders were chosen specifically because they were carved and moved centuries ago by the glaciers which covered the North American continent. While the weightless quality is provided by the translucent hues, and the permanence of the heavy rocks is insinuated, Hodges deftly reminds us that nothing is immovable or permanent.
First displayed indoors at the Gladstone Gallery in New York City, the work was then moved to the Walker Art Center’s outdoor grounds to coincide with the Sculpture Garden’s anniversary, as well as an upcoming retrospective exhibition. Hodges retrospective, Give More Than You Take, is currently on view at the Dallas Museum of Art and extends through January 12th, 2014. The exhibition will then travel to join Untitled (2011) at the Walker Art Center. (via walker art center).
.
.
.
.
.
.
.
source: trendland

Sculptor Jim Hodges (1957) created a compelling installation at Barbara Gladstone’s 21st St. location in NY, grouping 4 large scale boulders around a central void. Hodges replaced part of the original surface of the rock with vibrantly colored stainless steel casts offs. Part of an new body of work that extends to Gladstone Gallery’s 24th St. location as well, the installation is a magically poetic reference to many religious traditions, from Japanese Kami beliefs or Stonehenge worship sites to Judeo-Christian as well as Muslim practices in which rocks were embellished to embody a myriad of spiritual notions.
.
.
.
.
.
.
.
source: marnicays