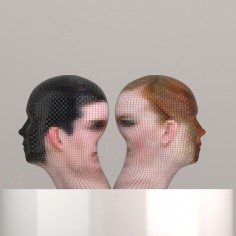 source: gianlucatraina
Gianluca Traina was born in 1984 in Palermo, where he currently lives and works. He attended the art school of his hometown, where he graduated in 2002. In the same year, he moved to Florence to study Fashion Design at Polimoda. In2004 he won a scholarship of the Camera Nazionale della Moda Italiana in Milano attend a specialization course in Fashion Home Design. This course enabled him to acquire the necessary knowledge that will open the doors of the fashion Empire. His work until 2008 for the most important companies in the industry, boasting important partnerships and experiences.

The failure of his expectations in the fashion industry and the lack of real opportunities for professional development led him in 2009 to return to his hometown and attend a course in painting at the Academy of Fine Arts in Palermo.

Since 2009 in parallel with the study begins to develop interests and projects, that would soon lead him to live an extraordinary popularity and rapid and intended career in the art world. His research is focused in painting and sculpture, overlapping unusual and contemporary materials such as PVC and paper, through which develops forms, signs and places taken from a personal memory and the suggestions from different cultures and historical periods typical of his Mediterranean identity.

In 2012 developed an innovative system for creating three-dimensional shapes through the use of two-dimensional surfaces such as paper, this system will allow him to create his own project called PORTRAIT 360 °, a series of portraits of people through the synthesis between image digital and craftsmanship will make him obtain a great success in 96 countries of the world. It ‘so clamorous his success in a few weeks captures the attention of the web and many design, fashion and communication magazines that identifies the innovative and futuristic value enough to suggest the project portrait 360 ° as a trend to be followed for the design of new products. In December 2012 Gianluca Traina exhibited for the first time Portrait 360 ° in Miami during the Art Basel with ROBERT FONTAINE GALLERY at the art fair SCOPE. Since then he established a partnership with this American gallery that continues today and that allows him to be present, year after year, in the most important art fairs in America. With Robert Fontaine Gallery Gianluca Traina exhibited his Portrait 360 in group exhibitions, and part of its production it is represented by this gallery.

In 2013, Gianluca Traina participates in the Tokyo Designers Week, exhibiting the work UnPortrait in the section THE YOUNG ASIA, together with the exhibition of his work won first prize as best designer of 2013. In 2014, Unportrait will be exhibited in Milan during the Salone Del Mobile in Japanese pavilion with the association of Japanese design.

In 2014 he participates in Americans ArtPrize , his work “Low & HIGH” has an incredible success, its production was noticed by a major American company that manufactures sunglasses and eyeglasses, the MARCHON that selects for artistic committee. With Marchon produces a work with the industrial wastes in production of glasses and that will represent the company in a sustainable project that will allow him to exhibit the work in the world between 2015 and 2016.

In 2015, his work “Watch Me” is selected to be exhibited during the EXPO MILANO 2015 at Fabrica Del Vapore in the group exhibition MILANO CITY OF THE WORLD. In the same year, the artist received the proposal to be represented in China, Hong Kong and Singapore by the platform ASIA CONTEMPORARY ART BUYER. Asia seems to be a familiar place for the artist, territories that with time he learned about and from which is inspired by the hand skills in manufacturing objects and place of the heart that promptly used to search for new languages. His artistic research and the attention with which the artist produces his works allow him to develop pathways that hybridize between the sectors of the art, fashion and design. His work is always trying to create a human relationship between the viewer and the art object, the report with which the artist develops unusual paths of perception that take advantage of the modernity of digital imaging and analog fruition of the vision artwork. The modernity of this process make his artistic research unique and unrepeatable, contemporary and futuristic.
.
.
.
.
.
.
.
source: saatchiart
I am an Italian artist | designer. I’m interested in design and fashion, and any form of intelligence. I followed a professional career based on the contamination of all areas of creativity. After a long experience in the field of fashion and design, I came to art with an unexpected harmony.
.
.
.
.
.
.
.
source: ufunknet
Une sélection des créations de l’artiste italienne Gianluca Traina et de sa série Portrait 360, qui mélange habilement sculpture et photographie dans des portraits étranges et surréalistes, tissant l’image en deux dimensions de ses modèles anonymes sur des bustes en trois dimensions…