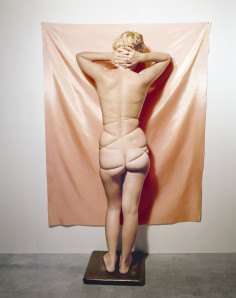 Callis began her art studies in Ohio in the 1950s, as a high school student in Cincinnati and in college at Ohio State University in Columbus. However, her academic work was interrupted by marriage, a move to Los Angeles, and child rearing. After taking several studio classes at night in an attempt to return to her education in painting and sculpture, she decided to enroll at UCLA and finish her undergraduate degree in the arts. She subsequently entered the graduate studio program. Her professor, Robert Heineken, encouraged her to experiment with photography in the studio, using her skills in the other arts to construct scenes for the camera. Callis began teaching at the California Institute of the Arts (Cal Arts) in 1976. A Los Angeles gallery show in 1981 paired Callis’s color work with that of Paul Outerbridge. Her avant-garde style of fabricating photographs was subsequently recognized, and her work exhibited and published internationally.
.
.
.
.
.
.
.
source: artspace
Known for her pioneering feminist photography, Jo Ann Callis emerged in the late 1970s after studying a range of mediums, including photography at UCLA under Robert Heinecken. Callis’s proficiency in sculpture and painting enable the artist to construct models and staged scenarios, which she has photographed throughout her career. Among the various themes that emerge in her work are: solitary domestic moments, a sense of beauty, and an attention to the tactile nature of objects and people, all pervaded by feelings of anxiety or tension. Callis told The New Yorker in 2014: “The images are more about the routine of life, the actions in which we partake every day. I set my photos in a home because having a home is something for which I’m so grateful and consider a backbone to my life. It is the stage for so many crucial things that occur in a lifetime.”

Callis, who began teaching at CalArts in 1976, has exhibited her work throughout the United States and the world, including at institutions such as the J. Paul Getty Museum in Los Angeles, the Santa Monica Museum of Art, the Cleveland Museum of Art, and the Museum of Modern Art in New York.